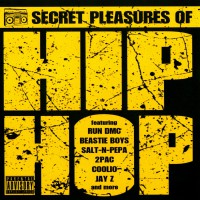 I’m not sure I really know what a secret pleasure of hip hop is. In a pop world of careerists, copouts and mealy mouthed stooges, none of the songs here are any more blood curdling or any less seductive than a whole heap of chart stuff across the late 80’s and 90’s. All were commercial shots at instant popularity and all were big time successes, even if it was off the back of irresistible riffs and hooks shamelessly lifted from the original records. Unquestionably they all struggled with the fine distinction between crossing over and selling out but the likes of De La Soul and Naughty By Nature proved that pop rap (because that’s what all these are) didn’t have to be as cartoonish as MC Hammer or as mindless as Snoop Dogg. And yet even their records were as catchy as hell.

Naturally my jury’s still out on some of them. Will Smith may be an all round nice bloke but as a rapper he’s well dodgy and Puffy’s not much better. And while I may well singalong to the damn thing, I still can’t decide whether Jay Z’s mix of Annie’s schmaltzy, sentimentalisation of poverty with his own hip hop reality tale is the crassest, most commercial gesture ever or a stroke of genius. But then, it doesn’t really matter what I think. As if you didn’t already know it, these tunes weren’t built for thinking.