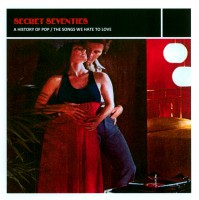 At the dawn of the seventies, before I got into the so-called serious stuff, like most pre-teen, teeny boys, I was stricken by pop. In the summer of 1971, I was 11 years old and finally waking up. Sure my Dad had records lying around but they were part of a vanished world called the sixties and nothing to do with me. I know it was that summer because some songs are seared on my mind: ‘The Banner Man’, ‘Tom Tom Turnaround’, ‘Pied Piper’ and others. Not exactly revolutionary stuff! That soundtrack came, not from the original singles, but from one of those cheapo Music For Pleasure covers collections bought for 10p in the local newsagent yet perfect for miming in the bedroom with my Silver Star hardboard guitar.

Oh how I loved that guitar. taking the singing into a hairbrush scenario one step on, I concocted imaginary groups, wrote mythical biographies, and even designed and constructed full size album sleeves. It was an innocent, escapist, wonderful world where joss sticks were dope and my dimly lit bedroom was Madison Square Garden.

The first ‘real’ single I ever bought was ‘Telegram Sam’ by T.Rex. That would have been in January 1972, just after my twelfth birthday. It was a life defining moment as I began to follow the mystic pied piper along the road to cosmic enlightenment. Each week thereafter I saved my hard earned pocket money to gorge on a relentless feast of pop singles. It was a necessary rite of passage, where records were holy relics and dropping the stylus in the groove was the holy sacrament. It really was as important as that.

Back then I thought I was the only one who felt different; the only one living in an imaginary world, obsessed with glittery pop and rock stars, their records, what they wore, what they said and what they didn’t say. Of course a few years later I found I wasn’t alone and there was a whole tribe of similar lost boys (and girls) strung out across the land?

As I hit my teens I turned away from pop for darker, more thrilling kicks. Somehow pop seemed too frivolous and frothy, although it was still all around me, on Top Of The Pops, jukeboxes, radio and nightclubs. Most of the songs here soon receded from my life even though they inevitably reappeared years later in a haze of nostalgia as all records do. Most of these are pure pop fluff and by their very nature only designed for one fleeting, dazzling, moment. And yet, even these Secret Pleasures have informed my life in some way, no matter how randomly.