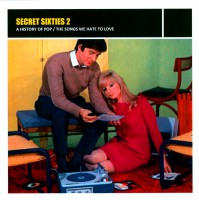 In the first of these Secret Sixties I blathered on about my old man and how his records must have seeped into my soul because, whether we like it or not, we are all shaped by our fathers and mothers. When we are young we don’t know it and wouldn’t want to imagine it even if we did, but as we get older it slowly dawns on us how much our parents contributed to our very essence.

Fortunately, I have no problem acknowledging how my old man shaped me although I’m not so keen on his ghost looking back from the mirror every morning. I know that if it wasn’t for him there’s no way my life with music and its ability to make my world a better place would have happened. Sure, it may have been my own awareness that ultimately determined my own path but it was his influence and racks of pop, easy listening, folk, country and soul records that lit the blue touch paper. And when it comes to the Sixties, it’s really his taste I’m tapping into. Way too young to care about anything other than the usual boyhood stuff, I was there but not there!

In those ten years my Dad went from his late twenties to his late thirties. I’m more than a decade older than that now yet I can still recognise how the songs here represented the start of a new pop age, an age when fifties resistance to the birth of the teenager had been all but wiped out by youth cultures own refinement and radicalisation, a time of fun fun fun, highschool, dance crazes, teen idols, girl groups, and the dodgy British invasion.

Early doors it was all strictly pop. There was no such thing as rock. That would come much later, yet even when it did, the charts were still packed with records like ‘The Legend Of Xanadu’, ‘Cinderella Rockefella’ or ‘Build Me Up Buttercup’ rather than the latest psychedelic freak out or never ending cosmic blues jam. In fact, some of those hits and near misses were so absolutely pop they continue to bring a smile to my face. And in a 21st century where a global cocktail of poverty, starvation, outrageous wealth, mass terrorism and religious insanity looks like it might plunge humanity into a new Dark Age, we need as much of that as we can get.