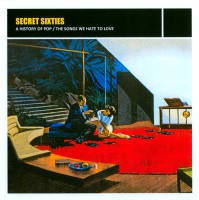 Let’s face it, most people don’t give a shit about pop music. In the early dawn of the 21st century it just doesn’t seem to matter anymore. Once upon a time, pop music was modern culture. These days it has returned to the pre-Beatles sixties; sugar sweet, razzle-dazzle, showbiz puppets of middle-aged entrepreneurs playing their end of the pier equivalent. Except now that pier has moved to the 60 inch plasma screen in your living room with Simon Cowell as puppet master supreme.

I was just about around for the start of the real sixties, born a nice middle class, suburban boy in the very last week of the fifties. Pop meant a lot more back then, although it didn’t mean that much to me. Toy soldiers, cowboys and Indians, scalextric, subbuteo and bikes were far more exciting. But, pop gradually seeped into my soul. Thanks to my old man it was always around, always being played, and these records (because that’s what they are really, not CD’s at all) are my tribute and thanks to him.

Like his own father before him, ironically nicknamed ‘Pop’, my Dad was completely obsessed with music, records, tapes, portable players, hi-fi systems and super stereo sound. I have clear memories of musty, dusty sheds piled high with the rusty innards of ancient turntables, speakers and valve amps. Infact, clearing out my parents loft recently, with my Dad long gone, I uncovered his last stash of long lost, sixties and seventies vintage record players, all wood effect sticky back plastic and smoked Perspex.

I guess music made his world a better place and the same thing happened to me. The first song I remember is ‘Battle Of New Orleans’, not sixties at all although that’s when I would have heard it, and it was probably the rip off Lonnie Donegan version rather than Johnny Horton’s because my Dad loved a bit of Lonnie. In truth his taste stretched from Dylan to Debussy and all points between, although in his later years there was a scary amount of easy listening.

Even so, all of these tunes bring a smile to my face and a glow to my heart. Strangely, some have even become hip, referenced by ubercool oldsters like Nick Cave, Quentin Tarantino, Mark Smith and Jarvis Cocker. Odd to think how times change and how the ghastly can become the good. But, as we all know, that’s the nature of Secret Pleasures, the songs you can’t quite admit you like. My old man would have had no problem. He loved them all!