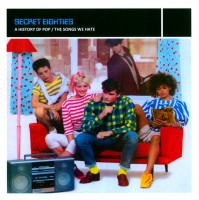 In the sixties and seventies, pop was always something of a fluke, never a genre all on its ownsome. The charts were filled with an odd mish mash of easy listening entertainers, novelty sing songs, disco lightweights with Colgate smiles, and sometimes even serious rockers with a killer riff and catchy hook.

In the eighties, pop began to get serious. A fulltime career option for aspiring young boys with guitars, synths and a little bit of funk in their skinny, white arses. It was a time when theories were drafted and thesis written by po-faced music journalists trying desperately to construct their own future from the rubble of punk. Suddenly pop got complicated. It was inevitable. Everything changes and nothing ever stays simple.

I only had half an ear on this new world, and that was on the innovators; Gary Numan, The Human League, Soft Cell, Depeche Mode, none of whom you’ll find here. The rest were opportunists latching onto the surface shit, the glossy videos, the deluxe production, the gender bending and the dressing up. They were the bandwagon jumpers, clones and serial careerists.

Its not like new pop was the only option either. There were plenty of alternatives that were weirder, druggier, nastier, elusive, life changing and occasionally life threatening. After all, this was the age when every sub-genre became a serious youth cult, from Mod to Oi, New Romantic to Goth, Rocker to Psychobilly. But, an odd thing happened. A lot of kids hitting their teens thought these careerist pop fuckwits were the real deal. They were attractive, sexy, glamorous, ‘talented’ and rich. Infact, these new pop heroes were everything their audience ever wanted to be.

Of course, on reflection, none of these teeny teens ever had much of a chance. They were living in grim times, when the war mongering Bitch Queen Thatcher was proclaiming ‘There is no such thing as society, only individuals’. The poor mites were doomed to a life of greed and everlasting smugness.

And yet, despite it all, I still like these songs. Some, like ABC, Bow Wow Wow, Aztec Camera, Everything But The Girl, Lloyd Cole, aren’t really Secret Pleasures at all. As for Wendy James of Transvision Vamp, I had my best wet dream ever over her which neatly sums up why eighties pop wasn’t all that important. It was all just a bit of a tease when there was so much more important stuff happening.