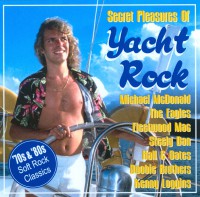 Thirty years ago there was no such thing as Yacht Rock. We knew it as Soft Rock, Corporate Rock or as one punky herbert put it; Fucking Horrible Rock. Whatever it was called one things for sure, the songs here were a handy soundtrack to America’s yuppie dream of the millionaire lifestyle; endless riches, fountains of champagne, silver platters of cocaine and sailing the seven seas with a posse of bikini clad babes and Peter Frampton at the wheel.

Not surprisingly, most folks I knew wanted these Soft Rock luminaries burnt at the stake for their crimes against rock’n’roll and I agreed. Having replaced any last vestiges of dirt and edginess with their own faultless musicianship and sonic sophistication, Michael McDonald, Kenny Loggins, Hall & Oates, Christopher Cross and the rest had turned rock into a smooth, inoffensive, pop soul mush fit for elevators, shopping malls and little else. There was no denying their tuneage was often top drawer but they were still completely irrelevant in the musical landscape of the times. These days I’m not so sure and that’s largely down to J.D. Ryznar’s 2005 online comedy series Yacht Rock.

Ironically, despite being a merciless piss take of Ol’ McDonald, his clique of LA collaborators and sessioneer’s and late 70’s/early 80’s yuppie culture, the series led to a mass rebranding and worldwide reappraisal of the whole genre. Not only was it gifted a new name, a 21st century generation of twenty and thirty something’s suddenly began to champion records that had long been consigned to the bargain bins. Now there’s Yacht Rock club nights, Yacht Rock radio shows and even Yacht Rock T Shirts. I guess it just goes to show how time can change perceptions and how every type of music will eventually find its own place. Even Yacht Rock, surely the most secret Secret Pleasure of them all.