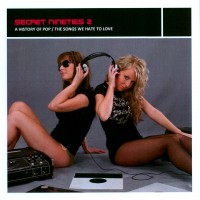 At its best the top forty has always resembled a massive house party with nobody on the door. The extroverts are shaking the dancefloor, the oddballs are in the kitchen and all manner of surprising couplings are going on in the bedroom where the coats are piled high. The mingling of folks who would otherwise never meet is what makes it so interesting.

The nineties were that kind of party where almost anything could and usually did happen. Early on, it was all techno and dance rock before a splintering of scenes led to a mass of narrowly focused sub genres and an ever increasing split between chart pop and the rest. As a result, a cold, northern winter fell over British pop as it struggled for a new direction, particularly as most would be popsters found themselves incapable of surviving in an environment where ambition was an absolute necessity and marketing savvy more important than the music.

The lower reaches of the charts became awash with a tidal wave of chancers like The Farm, the Soup Dragons and Jesus Jones with their couple of good records and nowt else. Of course, no-one had anything of value to say and that state of affairs hasn’t really changed since, but boy, the 12 inch dance remixes sure were groovy!

And that’s how it would have stayed if Britpop hadn’t tumbled over Primrose Hill to lay karmic waste to pretty much everything. I think enough time has passed now for us all too finally admit what a load of old bollocks Britpop truly was. Yet hidden amongst all its revivalist, jingoistic nonsense there was still a treasure trove of great pop records, even if they were by a load of non entities with decidedly average names like Salad or Dubstar or Rialto.

It’s weird I know, and it must be because the nineties were such a glorious fucked up mess of never shoulda, woulda, coulda’s, but this volume of Secret Decades is one of my favourites. Admittedly there’s a lot of stuff here that never made it past the outer reaches of the top thirty. Then again, that’s where the good stuff always hides out. Whenever it’s musically up against any other decade, the nineties always come in last. They are the perennial losers. But in this particular race I’m happy for them to claim a victory, no matter how small it may be.