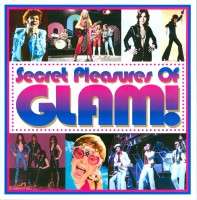 In 1972 I was twelve and had just started buying singles, albums being far beyond my meagre pocket money. The timing was perfect, Marc Bolan having kick started the glam revolution barely six month’s before. Simple, flash and disposable it injected pure fun into the pop culture bloodstream. The reawakening of the hit single was buttressed by speedily made glam albums, padded with revivalist rock’n’roll and unoriginal originals yet even when the production line chancers moved in to Serve up the mien fuehrer of glam Gary Glitter, The Sweet, Mud and Suzi Quatro, the music and images remained thrillingly entertaining. More ‘serious artists’ like Elton John and ELO merely dabbled, Jeff Lynne appearing on TOTP’s in a particularly gimp silver wig, beard still intact of course. So this is the not-so-cool side of glam, those poetically described as ‘brickies in make up’, the star studded shams. Even at 13 I knew the difference well enough but they can still get my feet stomping with memories of church hall discos, illicit fags, a bottle of cider and a grope in the dark.