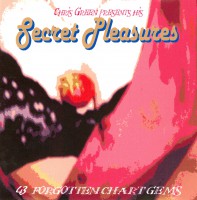 Strange how the world turns because now these pleasures are big business, an overground cult where the uncool is cool and it’s ok for all our sins to be forgiven. Strange how the time has finally come for all those geeks who were never part of anything, who never saw music as anything other than a nice tune.

So here I go back to the age of innocence, the age of leaning against a tree in a sweater, shorts and long grey socks, almost ending with the dawn of the eighties and my twentieth birthday.

I guess my very first listening experiences came from my ol’ Pa’s love for showbizzy types, Tom Jones, Roger Whittaker, even Bobbie Gentry. I’m surprised there’s no Val Doonican or James Last on here somewhere. Record wise he only had a few old Beatles singles, Bob Dylan’s first Greatest Hits and ‘Bridge Over Troubled Water’ so we had to make do with those Music For Pleasure Chart Hit collections, 10p from your local newsagent and packed with hastily recorded cover versions. Most of these songs, certainly up to 1973 were heard in this way. Now over 30 years later the originals don’t seem quite as good. But of course they still time warp me straight back to those past people and places, filmic scenarios running through the DVD player of my mind.

With a shady punk past, at one time I would have been laughed out of town for admitting any acknowledgement of the Doobie Brothers, Mr Big (a completely forgotten classic by the way), Andrew Gold and particularly the hippy Supertramp. Late 70’s era Rod Stewart was an even more serious offence, as he churned out high quality dross without the merest hint of credibility. But, ‘I Was Only Joking’ is a jewel, neatly summing up some of my youthful antics most accurately.

So what’s the difference between all these and my regular listening habits? I think it’s obvious. These Secret Pleasures are pure nostalgia, music from and stuck forever in the rose tinted past. None of these songs made or make me believe music could matter so much, that music can transform the world, even if only through altering just one persons perceptions or enlarging their sense of possibility.

For that reason these are my Secret Pleasures and remember, never mind the bollocks here’s some more!