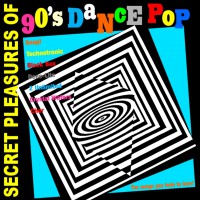 Ridiculously lightweight, upbeat and radio friendly, in the early nineties I would happily have maimed or murdered any fool who had the audacity to play any of the tracks here in my presence. Being a dumb snob, I hated them all with a passion, largely because they represented the cultural enemy. With a head full of hip hop, techno, acid, Madchester and God knows what else, dance pop co-opted the sound of the underground and then threatened its very survival by turning it into a pissed up, plebeian, dancing round your handbags, Saturday night ritual.

The whole sorry episode reminded me of seventies disco, an underground phenomenon cleaned up and castrated when the classic disco beat was thrown behind any number of inappropriate rock types like Rod Stewart and Kiss. Dance pop had a similar knack for dragging the most unlikely artists into the fold but with far better results. First came those saintly champions of bedsitland Ben and Tracey with some great Todd Terry remixes before Secret Pleasures icon Cher not only rewrote the rule book by introducing auto tune but also enjoyed her bestselling single and album ever.

And you know what, whether it was Cher, Everything But The Girl, Snap, Army Of Lovers or Corona, no-one could deny that all of those records were incredibly well crafted (albeit mindless), pop tunes. A lot of folks got that instantly but given how righteous and vengeful I had been, it took me a few years and some distance from their original cultural context to accept them for what they were. Yet ultimately I was seduced and by decades end I too could be found off my head, dancing round my dodgy man bag in a dodgy European club to the likes of Ultra Nate or The Tamperer’s inspired reconstruction of The Jackson’s.