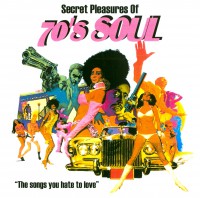 In the summer of 1974 a friend’s parents were gifted four tickets for The Chi-lites at Blazers Supper Club, Windsor. Being more liberally minded than most, and having exhausted their list of dinner party friends, with understandable trepidation they asked us to go with them. Proving how slack licensing laws were back then (you could easily be a full blown alcoholic at 15) we had to pretend to be 18. As such it was my first trip into the mysterious realms of adulthood. Excited. Betcha by golly!

Suffice to say, it was everything we thought it would be; scampi in a basket; shit ventriloquist; shit comedian, but we were far too busy stroking our bum fluff and supping our lager to care. When The Chi-lites came on, dazzling us with their gleaming white teeth and pink flared jump suits, I feared the worst. Pure showbiz, it was very seventies and very sad but when they began ‘Have You Seen Her’ my cynical heart melted.

It’s not often you get heartbreak and fuzz in one song but ‘Have You Seen Her’ had it in bucket loads, it’s genius encapsulating why I was once so smitten with sickly sweet Secret Pleasure soul. At once both immense and ludicrous the scenario of sitting on a park bench would became a familiar one to me over the coming years as a host of Julies, Beverly’s, Susan’s, Karen’s or their Mum’s decided I wasn’t the boy for them and left me hanging on a date, ‘watching the children play’, counting the raindrops and praying for the bus home.

When I finally returned to the sanctuary of my bedroom and its lurid orange wallpaper I would always seek solace in a handful of Barry White, O’Jays or Stylistics singles, the Velvet Underground or Bowie unable to ease my puppy love misery in quite the same way. Of course, by the morning more often than not my broken heart had healed, the records put back in the rack ready for my next romantic nightmare.

But they had done their job proving once and for all that every record has its time and place. None of them were ever going to stay with me, indeed, it’s only now, almost 40 years on that I’m listening again wrapped in the warm comforting glow of nostalgia, and yet they were still an important stop off on my magic rollercoaster ride through pop culture.