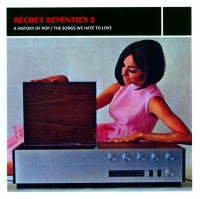 I’ve always been a big pop fan. As soon as I hit the pop road to Damascus I’d fall asleep under the covers with a tiny transistor stuck to my ear blasting out the latest smashes on Radio Luxembourg. So I find it kind of ironic that most of those very same songs have now been exorcised from pop history and are now considered nothing more than mere Secret Pleasures. They have become the songs we hate to love, or at least the songs we hate to admit we love.

Despite putting together playlists like this for years, the whole concept of Secret Pleasures still strikes me as somewhat strange. The Oxford dictionary definition is straightforward enough: ‘Something one enjoys despite feeling that it is not generally held in high regard’ but that much has always been obvious hasn’t it? What’s far more interesting is the realisation that actually, all Secret Pleasures are dictated by personal taste and the self-perceived notion of what is or isn’t cool. And that’s where it can get a little tricky. No doubt everyone would agree that David Cassidy and The New Seekers are Secret Pleasures? But what about Simon & Garfunkel, Cat Stevens or Nilsson? D’you see what I mean?

One thing I do know is that the seventies was the greatest Secret Pleasures era of them all. These days it’s viewed not just as a different country but as another planet ruled by aliens in beards and flares. The only positive thing I ever hear about it is the nostalgia fuelled celebration of its kitsch cool; from Curly Wurlys to chopper bikes, space hoppers to hot pants. And Secret Pleasures were most definitely a part of that!

The seventies were an absolute goldmine of the Goddamn things largely because pop music itself was cast adrift, quietly forgotten as the LP and a far heavier, more serious musical age was ushered in. Suddenly pop was heard as outdated, manufactured lightweight fluff and to a certain extent it was, yet I can’t help feeling that was the moment its naïveté and beautiful innocence were lost forever. Not that I cared. Mid decade, deep within the realms of punk, I pissed on all of these songs. Little did I realise that almost forty years later I would be returning as a retro treasure seeker with a far more open mind, determined to hunt them down.