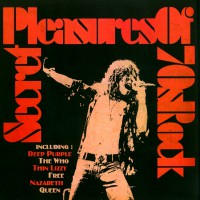 When I were a lad, all I knew of rock was hidden amongst the bubblegum pop fluff, naughty reggae rhymes and sickly sweet soul on those Music For Pleasure LP’s I now realise were my pre-teeny self’s life blood. Deep amongst their 10p grooves lay rough approximations of rock smashes by legends like The Who and Free or the not so legendary Frijid Pink and Grand Funk. Dismissed by rock snobs as chart fodder, yet loved by boys of a certain age, most of them also happened to be the staple diet of school bands everywhere and my own band Midnight Creeper were no different.

Certainly up to ’75, all of these were our staple diet too, even though we didn’t have a clue what we were doing and my drumming was strictly from the Mo Tucker school of rock, not because I was cool but because I was shit. The fact that the best school bands (my schools were called T.N.T.) were no more than human jukeboxes and the ultimate accolade was ‘They sound just like the record’ tells you everything you ever need to know about the mid 70’s and these songs. They exist in a kind of weird popular rock wasteland, sneered at by aficionados’, forgotten by everyone else, which is why they are some of my very darkest Secret Pleasures. I mean, only a complete idiot would ever admit to liking a Quo song wouldn’t they?