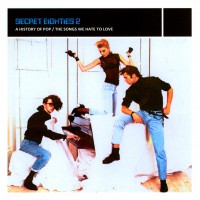 When the Secret Pleasures virus swept across the UK in 2006, a generation of forty something’s suddenly found the excuse they’d always wanted to buy that A-Ha or Thompson Twins Greatest Hits. Suddenly pop, as in popular, was all the rage and we could all admit to liking Kim Wilde, Nick Heyward and Deacon Blue without feeling in the least bit ashamed.

What none of us realised at the time was that buried deep within the Secret Pleasures concept and it’s dizzy rush of middle age hedonism, there lay a disturbing truth revolving around punk and the powerful rejection of its various cultural anathema’s leading to a refusal by my generation to enjoy anything not perceived as cool. And it wasn’t just punks who fell for it. A jaded self consciousness swept British culture so absolutely and successfully that it has continued ever since.

Coming straight after punk, the eighties was the first decade to suffer. Despite the plethora of truly remarkable music that evolved over those ten years, to this day pop criticism sticks rigidly to just two schools of thought. One complains that it was all crass, commercial crap, breathing a sigh of relief that we made it through that shit while the other celebrates the cheesy fun of it all, the naïve silly singles, bad haircuts and big synthesizers.

Both of these rather narrow views seem intent on reducing the whole decade to simple nostalgic fodder, ghettoizing an era that in reality was rich in innovation, brilliant one hit wonders, oddities and inexplicable flukes. It could even be argued that the eighties was the last great era for pop singles, the very last time that singles really mattered and the last time something totally unexpected captured the imagination.

In fact, the decade’s best songs offer some of pop history’s finest Secret Pleasures. That’s why you will never find aged rockist’s making arguments for its numerous benefits like they do for the saintly sixties or seriously rock seventies. I’ve never taken any of these Neanderthal’s seriously. After all, surely anyone can hear the beauty in records like ‘I’m In Love With A German Film Star’, ‘The Day Before You Came’, ‘Feels Like Heaven’, ‘Duel’ and ‘Driving Away From Home’ and how they match those by their more lauded contemporaries. It may have been only pop, but it was pop of the most brilliant kind.