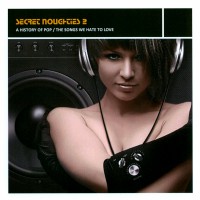 Few industries went through as much upheaval in the noughties as the music biz. Of course, music is art and art is always evolving, but rarely had there been such tortuous change in such a short space of time. It wasn’t just what folks were listening to that was new but how they listened to it and how it affected them.

Incredibly, with illegal downloading we were all able to jump aboard the time machine to become teenagers again. In fact some of us went back even further, our easy access to every moment and every influence in music history turning us into toddlers with too many presents. Not that there was any alternative. With record shops closing down at an alarming rate, the only other option was to ignore all the free goodies on offer and go the supermarket CD route. I know plenty who did but to me, sending the latest overhyped piece of shite through the checkout with the cornflakes and pizza always seemed like an act of treason.

Apart from those luddites, most everyone else under forty got stuck in, so much so that the pace of pop really picked up. As if by magic, kids stopped giving a shit about genre constraints, my daughter thinking nothing of blasting out a dubstep tune, then an oddball Swedish pop song then a gently strummed, heartfelt, acoustic hit. Unencumbered by peer pressure cool, she’s never seen any contradiction in liking all those differing elements and emotions.

Despite that freedom, pop in the noughties still faced the age old accusation of being a desolate mire of vapid, moronic, endlessly repeating crap. Of course, the fact is that pop music has always doubled back on itself, quoted itself and dug up fresh graves; it’s just that in the noughties there were a lot more graves to dig up. In the past it had been easy to ignore criticism, but in the 21st century, what with social media and every motherfucker in the world voicing an opinion, that proved impossible.

Consequently, pop got slaughtered, yet it continued to do what it does best by providing the tunes we all like to hum, the universal songs that continue to infiltrate popular culture. In fact, I became so ensnared in its wonky, sticky sweet web that when I finally reached the end of this particular journey I was left feeling not a little sad. Of course, I know full well there will be more Secret Pleasures to come, and even more awaiting rediscovery from the past, but I can’t help wondering if they will ever affect me in quite the same way again.