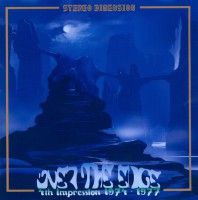 Nothing lasts forever and in the mid seventies progressive rock was, with the benefit of hindsight, in terminal decline. Shorn of their early inspiration and hunger, the figurehead bands hastened its downfall, lording it up in tax exile, touring less frequently and tossing off (in more than one sense) increasingly meaningless albums at increasingly long intervals. As they became more and more detached from reality, there was a move back to basics, which initially manifested itself in pub rock, about as far from prog as it was possible to get. And yet, even in decline the genre threw up a selection of long lasting highlights and nonsense.

Although 1974 can now be viewed as the culmination of prog excess, The Lamb Lies Down On Broadway was dark and brittle, revolving around Peter Gabriel’s story of a NYC street kid or alternatively, the story of every boy’s journey out of adolescence. His hippyish bandmates hated it and Gabriel, stifled by the constraints, abandoned them as soon as he possibly could. Red by King Crimson was another remarkable record by a band imploding, although the ever-reliable Pink Floyd rumbled on in their own time and space. As they became a number crunching stadium sized commodity, so Roger Water’s hatred of the music biz had hardened. Wish You Were Here was his view of the industry and a tribute to mad, sad Syd Barrett. The latter’s unexpected arrival during recording chimed with the thread of quiet desperation that haunted the record, no one recognising the fat, bald man with the shaved eyebrows who had slipped into the control room.

Queen joined the Floyd amongst the rock elite after A Night At The Opera. Unashamedly grand in design and clever in execution they were very cold and calculating, as were Genesis under the scheming anti Christ Phil Collins. While Trick Of The Tail was only a subtle change, within a few years he had turned a once fine band into a withering, bland, muzak machine. Jon Anderson, solo and with Yes, followed Collin’s into more accessible waters, but Olias Of Sunhillow was still chock full of sci-fantasy spiritualism, inspired by Roger Dean’s Fragile cover. Finally it was official - prog had disappeared right up its own arse!

Of course, pub rock never amounted to much but did pave the way for punk whose message began to hit home as soon as Johnny Rotten added ‘I hate’ to a Pink Floyd T-shirt. But even when punk hit the mass consciousness, the popularity of the dinosaurs was barely affected, as they redirected their energies into shorter, poppier songs, cut out the airy-fairy hippy Tolkienisms and went from commercial, if not artistic, strength to strength. But it was not the progressive rock of old, Pink Floyd alone staying true to their own cause, never a part of prog but the most important band in it. Animals was known more for the inflatable pig on the sleeve than the music but was based on Water’s Orwellian vision. I spent a lot of time with that record when an anarcho hippy friend pointed out that its subject matter, from a supergroup at that, was more subversive than the punk rhetoric. Another favourite Peter Gabriel remained credible too. Sporting suitably short hair, he launched his solo career with an avalanche of diverse ideas and flamboyant arrangements and all the signs in place for the great things to come.

Of course, the parallels between prog and heavy metal were numerous and few bands straddled both camps as ably as Canadian three piece Rush. Once Britain had sold its most bombastic groups to North America, the continent finally began breeding its own in their image. If 2112 was Rush’s breakthrough, existentialist sci-fi drama, A Farewell To Kings was their definitive statement, boasting all the old prog references welded together with one vision of the future - jagged, splintering heavy rock. But that proved a minor diversion. As a genre, progressive rock had already been given the last rites and by 1978 had faded away. The dinosaurs kept on working, albeit on a slightly smaller scale, but the real losers were the hard working backbone, highly regarded bands like Gentle Giant and Caravan, oddities like baroque folk hybrid Gryphon and the avant-garde Henry Cow as well as maverick individuals such as Peter Hammill, whose fan base was suddenly slashed by the appearance of newer, more charismatic outsiders.

I lived through these times but enlightened by Bowie, Bolan and the Glitter Revolution, only made the occasional foray into prog. I could never see any relevance in the clever, clever lyrics and arrangements, self-conscious obscurity and ridiculous excess, probably because I wasn’t an earnest, longhaired student in a grey coat. I guess I was always waiting for punk to happen, although one controversial view is that punk was less a revolution and more a restoration of rock’n’roll's ongoing, unfinished dialectic and the real heretics were not The Ramones, The Pistols or The Clash but the likes of Yes, Genesis and Pink Floyd. Because ultimately progressive rock was threatening, unusual music made by people taking chances, by bands on the edge. These days the genre is almost completely ignored and perhaps that’s why but it’s certainly worth exploring.