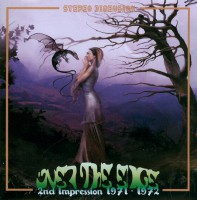 Progressive rock started as an attitude, grew into a movement and by 1971 had coalesced into a genre. The record industries attempts to embrace it led to a proliferation of ‘underground’ labels. They realised that having a specialised separate label was a way of serving fans who didn’t want to think ‘the man’ was selling them records. EMI went first with Harvest followed by Philips (Vertigo), Pye (Dawn), Decca (Nova) and RCA (Neon) as they all came to terms with the fact they were no longer looking for bands boasting traditional pop values. Slowly progressive rock became the most dominant genre in British music. No matter that Glam ruled the singles chart, prog endured, dominating the album charts (which we were all solemnly told was where the real money was), university halls and secondary school playgrounds, where mooching around with Fragile tucked ostentatiously under your arm was almost de rigueur. It’s hard to imagine now but once upon a time to be a prog rocker was to be cool.

Jethro Tull, Yes, Emerson, Lake and Palmer and Pink Floyd were already stars while Genesis would soon follow into the stratosphere. Most had already hit the album chart heights, not least Jethro Tull, who sold over a million copies of Aqualung, helped no doubt by singer Ian Anderson’s image as the one legged, flute playing vagrant. The mother of all concept albums Thick As A Brick followed a true testament of the times. Meanwhile Yes crystallised their sound with the complex arrangements and symphonic rock on The Yes Album. Then came the cape wearer himself, Rick Wakeman. Having already transformed The Strawbs from olde tyme folkies to shiny new electric folk rockers he took Yes to a whole new level of skill and showmanship on Fragile, singer Jon Anderson’s lyrical mysticism and Roger Dean’s artwork encapsulating the fractured world at its heart. Emerson, Lake and Palmer continued their focus on the more classical side of prog with Tarkus, an odd concept piece based around a battle between a Manticore (a mythical beast apparently) and a mechanised armadillo! Ever pretentious us Brits took it to the top of the album charts but it was Trilogy a year later that would prove their most enduring work with no concepts in sight. Thankfully not all prog dealt with sci-fi fantasy, fairytales, silver capes and air brushed art. The anonymous Pink Floyd machine rumbled ominously on, pushing the progressive envelope initially with Meddle and then with another film soundtrack, Obscured By Clouds. Genesis were lagging way behind but by 1971 had discovered a more elaborate sound. They arrived at their strongest line up for Nursery Cryme, adding ultimate tosser Phil Collins and guitarist Steve Hackett. Foxtrot took that progression even further, expanding on Nursery Cryme’s blend of the whimsical and macabre. It was also an evocative soundtrack to Peter Gabriel’s ever expanding wardrobe and provided their first album chart entry.

While the big boys sold all the records, won all the awards and made their fortunes, they were soon considered the mainstream by discerning connoisseurs and critics alike. Inevitably others became the new underground, led by Canterbury graduates Caravan who with their jaunty, ever so English tone, were always considered ‘prog light’. Another branch of the Canterbury tree were Gong, formed by ex Soft Machine guitarist Daevid Allen. The original uber hippies, they revolved around his fantasy world of anarchic gnomes, pothead pixies and stoned innocence. Steve Hillage would also become synonymous with Gong but before that played his self-composed odes of love, peace and spirituality in Khan. Many, many times during the late seventies, in my eternal quest for enlightenment, I tripped out on fields of mushrooms to Gongs innovative space grooves, pouring over dog eared copies of Siddhartha and Jonathan Livingstone Seagull.

Throughout the early seventies progressive groups made significant advances in fusing various musical styles into new forms. Much of it was a challenging listen resulting in immediate cult status although Curved Air, Atomic Rooster and Arthur Browns Kingdom Come all flirted with the album and singles charts. In contrast Gentle Giant became one of the most celebrated and cerebral bands of the era but with dismal sales. However, no prog band fits the cult identikit more than Van Der Graaf Generator. Pawn Hearts was their existentialist and gothic masterpiece that sold almost nothing. It’s interesting that these days they are one of the hip prog names to drop, everyone likes them. Back then no one did! Not so Led Zeppelin, Hawkwind, or even Uriah Heep who were never truly prog rock though I thought so at the time. All flirted with mystic imagery, particularly Zeppelin, their IV often referred to as the Runes album. Uriah Heep were slaughtered for plagiarising Page, Plant and Co but Demon’s And Wizards was more fairytale than Aleister Crowley. Hawkwind were different again, In Search Of Space full of hippy spiel, sci-fi mysticism, Stonehenge and naked breasts.

Naturally as its influence spread, progressive rock filtered into mainland Europe, the spiritual home of all things classical and symphonic and Holland’s Focus, Greece’s Aphrodite’s Child, Sweden’s Bo Hansson and Germany’s ex English art rockers Nektar emerged. And so the dinosaur rolled on, approaching its peak in popularity and creativity. This was the golden era and none could deny progs domination…for a few more years at least.