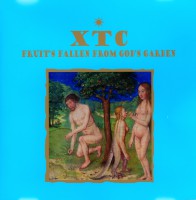 I was born in one of Reading’s first suburbs, built on the remains of a derelict country estate. I had a semi-rural, reclusive upbringing, the fields and wood’s of beautific Berkshire just a short bike ride away. XTC were four slightly older lads from Swindon, just up the M4. In many ways both towns shared a remarkable similarity, what with their run down town centres surrounded by a creeping suburbia built on the ghosts of old England.

In 1977, living in Swindon immediately set XTC apart from the holier than thou Kings Road hipsters. Consequently they were ridiculed mercilessly as country bumpkins. Knowing exactly where they came from, all that mocking just made me love them more, so much so that these days when I hear one of their handful of hits floating over the anodyne airwaves, I’m immediately 17 again.

Starting out as just one in a long line of frantic, punky pop groups playing in my local pub, XTC meant so much more because their suburban teen life vignettes spoke directly to me. As they developed almost beyond recognition with brilliant records like Drums And Wires, Black Sea and English Settlement, they gradually carved out their own niche as one of our most under appreciated treasures. When Andy Partridge finally submitted to his terror of playing live, they retreated even further into idyllic fantasies of farm life, steam trains, rainy days, chalkhill’s and children.

I must admit I did lose them for a while, pre-occupied as I was with my own foray into the music industry they so loved to hate. Then, when I reconnected in the early 90’s just before their long hiatus, I remembered well what they had meant once upon a time.

9. Down In The Cockpit / English Settlement LP February 1982

13. The Everyday Story Of Smalltown / The Big Express LP October 1984

15. The Man Who Sailed Around His Soul / Skylarking LP October 1986