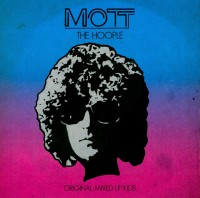 Mention their name in the right company and there’s a good chance you will be regaled with tales about the supposed romance of rock’n’roll, a lost 70’s netherworld of provincial ballrooms, shitty B&B’s, service station fry ups and in Mott The Hoople’s case, the first stirrings of a band-of-the-people spirit that would define punk. And all those tales would be true. Mott suffered them all, their early years so defined by such clichés that when 1972 came around, even with their glam ramalama, swagger and confidence they were being hailed as the archetypal, glorious British failure. What’s more they knew it.

On the verge of calling it quits, ultimately they were only saved by David Bowie’s gift of  ‘All The Young Dudes’ as their next single, a song that has come to encapsulate my generation almost as much as ‘Anarchy In The UK’. The greatest glam anthem there ever was, not only did it change Mott The Hoople by launching them on the road to stardom, in one way or another it changed me too.

Despite the fact that he was a 33 year old ale drinker from Shrewsbury of all places, Ian Hunter understood instinctively the mystery of rock’n’roll. However, of far more importance was his ability to transmit that feeling to a bewildered teenage boy, high on the energy and passion of youth yet imprisoned by the mind numbing boredom of middle class suburbia. His very ordinariness gave me faith in the belief that there was a better life out there just waiting for me. And as it turned out, I wasn’t the only one.

Ian Hunter’s songs on Mott and The Hoople had that rare indefinable otherness that comes along every once in a while. I can still hear it too, not only in the rabble rousing glory of ‘All The Way From Memphis’ and ‘The Golden Age Of Rock’n’Roll’, but also in the wistful tones of ‘Rose’ and ‘Saturday Gigs, Mott’s penultimate single and his last self-mythologising masterpiece.