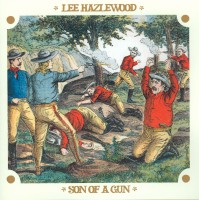 With his handlebar moustache and booming baritone, Lee Hazlewood must have cut an isolated figure in the 60’s showbiz world he inhabited. Frequently overshadowed by his collaborations with a whole host of desirable women, most famously Nancy Sinatra, his own records found him singing the songs no-one else wanted from him. Naturally they sold nowt.

That’s largely because Lee Hazlewood was blessed (or cursed) with his own unique, singular vision of pop. With neither the influence or allure of far less talented mortals, assessing his legacy is a little tricky. In fact, it’s much easier to think of him as one of those curious oddballs floating around the pop periphery, albeit one who in his last days found himself championed by the likes of Beck, Sonic Youth, Jarvis Cocker and Jason Pearce. Of his cult status, he once said; ‘Thank God for kids who love obscure things’. I say ‘Amen to that’ or he would be lost forever.

1. We All Make The Flowers Grow / Trouble Is A Lonesome Town LP November 1963

9. Some Velvet Morning (With Nancy Sinatra) / Single A Side December 1967

27. Your Thunder And Your Lightning / Back On The Streets Again LP October 1977