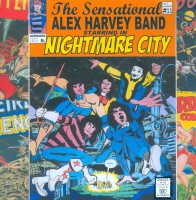 In the early to mid 70’s, apart from agent provocateurs like Bolan, Bowie and Ferry there wasn’t too much going on that wasn’t be-denimed. Alex Harvey was not in the least bit glam and did wear Levi’s yet he was different again. Just a couple of years younger than my old man, I first spotted him in 1973 on the Old Grey Whistle Test in a hooped shirt and knackered tail coat singing a Jacque Brel song about army brothels, queer lieutenants and gonorrhoea!

What an introduction that was. It didn’t take me too long to discover that despite having a huge comic side, even when they were being ridiculous the Sensational Alex Harvey Band were deadly serious. What’s more, they had a big fuck off sound that not only incorporated Brel but bar room singalongs and primitive rock’n’roll too. They even created their own unique urban myth with Vambo, a Marvel Comics street urchin hero based on Harvey’s own tough adolescence on the mean streets of Glasgow.

They were truly unique psychological harbingers of self-consciously non-macho and ironic conceptual rock walking their own path. And yet, despite uber hipsters like Nick Cave covering their songs and singing their praises, for some reason they continue to be buried in the flotsam and jetsam of 70’s rock beneath others far less deserving.

8. Weights Made Of Lead / The Impossible Dream LP September 1974