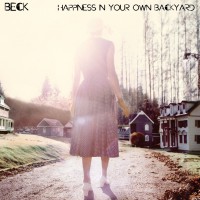 No matter what you think of Beck Hansen the artist, be he trendsetter or trend-follower, much of his artistic trajectory seems to have derived from when he was little more than a baby-faced cassette terrorist in a stormtrooper mask riffing surrealistic rhymes about burger joints and MTV. Somehow he’s managed to carry that with him, right from the moment he arrived as an unlikely one hit wonder and was tagged ‘a generation’s consolation prize’after Kurt Cobain blew his own head off. Three years later he managed to confound everyone with Odelay‘s confident insistence that American folk and hip hop imagery were natural bedfellows. A seamlessly fabulous noise, the boy tagged as a novelty slacker had done good.

Since then Beck has been not so much an artist of phases but of cycles. Among his finest virtues has been his respect for the album as a self-contained unit and while no two have sounded exactly the same, it has been relatively easy to decipher a distinctive pattern. After Odelay came the more insular Mutations, a folk-rock collection that included the swirling strings and oceanic acoustics of the achingly sincere ‘Nobody’s Fault But My Own’. That was followed by the funkier, hip-hop beats of Midnite Vultures which in turn was followed by the downer rock of Sea Change and the alternative hip hop and sixties pop of Guero, The Information, and Modern Guilt. The only curved ball was Song Reader, a conceptual sheet music project we didn’t get to hear.

What nearly everybody forgets about Beck is that he’s always been a folkie and a Californian one at that, so naturally, after three albums in a row without much of anything strummed or stripped down, he returned to the world weary emotions of Sea Change for 2014’s Morning Phase, his first new studio album in six years. This time around, instead of wallowing in his own sadness, he used it to show us how at 44, married with two kids, he was as comfortable in his own skin as he’s ever been. It was also one of the best records he’s ever made.

For all his insatiable appetites and experimental bent, Beck has always embraced the path of the old-fashioned artist, conceiving his statements as distinct, self-contained entities with consistency of mood an absolute necessity. And they’ve always been much better for it. Whether he had an epiphany under that stormtrooper mask all those years ago or simply prefers a neater body of work, he remains conceptual to the core yet very, very cool.