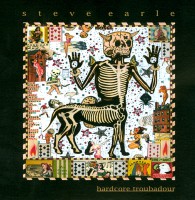 I’ve long had an affection for rootsy Americana, a hangover from my old man’s love of olde tyme country; Cash, Charlie Rich, Jerry Lee, Billy Jo, Tammy and all that. So I guess it wasn’t a complete surprise when I was drawn to Steve Earle in the post post punk, post Live Aid wasteland of 1986.

In part I was attracted by his already legendary bad boy reputation but it was Guitar Town’s attack on Reaganomics and the championing of society’s outsiders that really struck a chord, albeit a hard hitting twangy one. The rip roarin’ Copperhead Road confirmed what I already knew, the title track an absolutely irresistible anthem of white trash rebellion. Little did I realise that Steve Earle was unravelling fast, The Hard Way, which painfully documented his drug use and imploding lifestyle, a pre-cursor to a five year spell in the wilderness. At one point I was convinced I would be hearing of his early demise before too long.

Surprisingly it didn’t work out that way. Slowly but surely Steve Earle has established himself as a rootsy Renaissance man; political activist, radio host, rocker actor and playwright. He’s become the smart dude with the big heart, writing a heap of provocative tunes sticking up for the little man. A highly respected, dependable workaholic, he’s living proof that doing the right thing isn’t a complete impossibility.