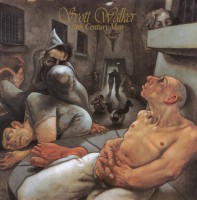 Scott Walkers career has never made any sense. Starting out as a sexy, 60’s teen idol in the Walker Brothers, by decades end his quartet of iconic solo LP’s had become less and less pop compliant and more croon heavy. It felt a bit like Donny Osmond morphing into the avant-garde composer John Cage.

I discovered his records in 1981 via reviews of Julian Copes Walker compilation Fire Escape In The Sky. That LP was impossible to find anywhere but luckily the originals were still around, certainly in Reading’s handful of second hand record shops. They are albums of such rare beauty that I find it impossible to write about them in a way that doesn’t sound stupidly gushing. Needless to say they have stayed with me and are still played occasionally when I’m feeling particularly maudlin.

The records that came after were far more difficult affairs, possibly intentionally so, and merely succeeded in pissing off his legion of fans who didn’t quite know what to do with the lack of melody, creepy synth drones, industrial opera and hostile string sections. They may have been intense and exhausting art of the highest order but they were also very pretentious and quite frankly a load of bollocks.

My take on it is that Scott Walker is a classic example of how cult status can magically attach itself to an artist where it grows like a weed, strangling and obscuring its host more and more with the passing years. Maybe he’s been pushing the boundaries in a vain quest to disappear completely. If he has, he’s failed miserably because the further out he’s gone the more his music has been celebrated. He’s found that if people won’t let you, it’s impossible to be free!

2. After The Lights Go Out (Walker Brothers) / Single B Side February 1966

15. The Ballad Of Sacco And Vanzetti / The Moviegoer LP October 1972