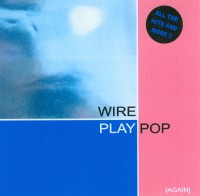 Trying to work out exactly when punk turned into something we now know as post punk is tricky because at the time post punk didn’t even exist. PIL, Gang Of Four, Subway Sect and Siouxsie were all considered punk even though they refused to conform to the stereotypical ‘Here’s three Chords’ mentality.

Wire were around before most of them, the first punk group most obviously swimming against the tide despite it being equally obvious they were absolute beginners. Now rightly lauded as an influence on everyone from R.E.M. to Elastica to LCD Soundsystem, they immediately appealed to my sensibilities. Incredibly they liked to think of themselves as a pop group and in an age when anything seemed possible, I agreed.

Naturally they sold next to nothing and were almost immediately consigned to cult status, but Wire continued to act as a catalyst for an in the know few who formed groups, moulded their ideas and turned them into an enduring influence. In that respect, they have become as important as fellow ahead of their time adventurers The Velvets, Captain Beefheart and The Stooges.

Of course, what Wire did was open the door to rock intellectualism at a time when that kind of thing was almost heresy. What’s more they did it without the usual snobbery or over elaboration, more often than not being as funny as they were biting. From the intimate minimalism of 1,2,3,4 punk ramalama to the enigmatic complexity of art rock, their first three LP’s are without any doubt whatsoever as important as anything in modern music culture and absolutely essential listening.