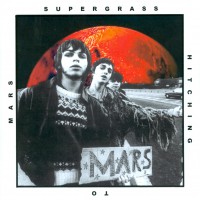 In 1995 Supergrass were spiky teenage upstarts, perfect for the more optimistic days of Britpop.  Sticking their tongues out at metal head grunge, pop had rarely sounded so youthful, naïve or energetic. From the stupendous one note guitar throb of ‘Lenny’ to the rinky dinky pop smash ‘Alright’, riding their Raleigh Choppers and getting in trouble with their Mum’s they were the perennial cheeky chap’s concocting some of the most effervescent anthems of the era.

Supergrass’s problem of course was that eventually they would have to grow up. No-one, least of all themselves, expected them to be hanging around for the next decade and a half. That they did so is an achievement in itself but even more admirable was the way they moved on from the Colgate smile of guitar pop to a uniquely British sense of melancholy and a search for something meaningful in this fucked up world.

It’s to their eternal credit that they were able to prove their significance far beyond Britpopdom, building up a catalogue of raucous, jubilant songs influenced by The Kinks and The Buzzcocks while tapping increasingly into the swagger and sway of early 70’s rock and (Thames) delta blues as channelled through the filter of The Stones and T.Rex. While they tend to be forgotten amongst the Blur, Pulp and Oasis’s of this damn nation, Supergrass were one of the greatest groups of their era and unlike many of their contemporaries, one who grew up gracefully.