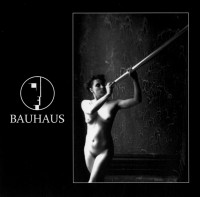 I never realised quite how important Bauhaus were to me until I started putting this together. Much maligned even at their peak and ignored ever since by weedy post punk commentators, in truth they were one of the most progressive, popular groups to develop from the wreckage of punk.

Me, I loved them. I must have seen Pete Murphy and the lads a good four or five times in those first couple of years. Live they were absolutely phenomenal. Little did I know I was witnessing some of the best shows I would ever see, full blown post punk theatre played to a backdrop of white light and shadow. Even Joy Division were early fans, the similarities between the two groups strikingly obvious particularly on the fabulous In A Flat Field and its songs of love, death, hope and life.

But it was on their ten singles that Bauhaus truly came into their own, each one completely different to what had come before or would come after. From the white boy art funk of ‘A Kick In The Eye’ to the swirling mystery of ‘Spirit’ and the metallic dub of ‘She’s In Parties’ Bauhaus suppled a sparkling litany of thrilling dark kicks. In the end, critically despised and fatally wounded by Pete Murphy’s lengthy bout of pneumonia, they just faded away. At the time, there was so much else going on I don’t think we realised quite what we had lost yet today their influence continues to stretch as far, often even further than so many of their more heralded contemporaries.

4. Rosegarden Funeral Of Sores / Single B Side October 1980