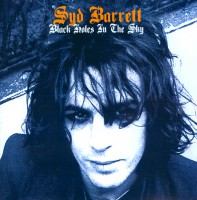 Apart from The Velvet Underground, Syd Barrett has got to be everyone’s favourite cult legend. Much of the initial mystery came from Nick Kent’s brilliant 1974 NME piece The Cracked Ballad Of Syd Barrett which continues to bewitch new generations to this day. When I read it for the first time it just happened to coincide with my purchase of the cheapo early Floyd comp Relics and an obsession with Syd’s odd little nursery rhyme ‘Bike’ tucked away at the end of side two.

Much like The Velvets, I’d never heard anything like it and similarly, while it was music from only seven years before, it sounded more like a hundred. Little did I know that by the time ‘Bike’ appeared on The Floyds Piper At The Gates Of Dawn, Syd’s mind had already begun to shred, unbalanced by his gargantuan daily dose of LSD. And yet for a while his diamond continued to shine as bright as anyone’s. It was what happened next, when he was finally booted out of The Floyd that it really got intriguing.

Theories, plots and sub plots abound but as Syd saw his brilliantly bright star fade in the dark globe of his battered brain, he chose to soundtrack his own collapse on two solo records. As both artistic and human documents, you only have to hear them once to know they offer uncomfortable creative evidence of an altered state pushed well beyond any endurable limit.

While those records still sound strangely other worldly, it was only when Syd retreated to his mother’s Cambridge semi forever after that he became the endlessly fascinating enigma who could never quite be reached. From innocent beauty to the edge of reason he epitomised the psychedelic age more than anyone else, lost in the woods for all eternity. And that’s why, even after his death, he remains so beguiling and as cool as fuck.