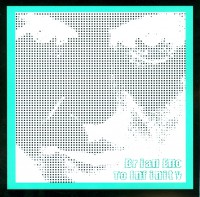 Pop’s much revered favourite boffin was born in Suffolk and signed his art school application Brian Peter George St John Le Baptiste De La Salle Eno. I guess that gives some idea class wise of where he was coming from. Not that I was bothered about such things. I knew him from Roxy Music, posing in make-up and feather boa as Bryan Ferry’s sleazy, evil twin, burping and farting on a Heath Newton synth. But, as everyone knows, he went onto mean much more than that.

He may have invented a brand new genre with ambient music, even if it was a bit dreary, but Eno’s main source of fame undoubtedly came from his Bowie and Byrne collaborations and his production duties with U2. Yet to my ears there was something far more addictive about his dalliance with the simple pop song.

Despite an obvious rather superior intelligence, clever clever strategies, concepts, theories and intricate working methods, Eno’s first two solo LP’s were absolutely essential listening for late glam pre punk hipster teens. With most of his artful pretence yet to surface, they were his most accessible work by some distance while three years later, with remarkable insight, Before And After Science provided a handy route map for post punk just as punk was dying on its feet.

14. America Is Waiting (Brian Eno And David Byrne) / My Life In The Bush Of Ghosts LP February 1981