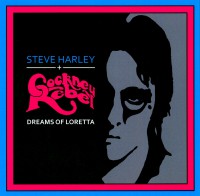 ‘The kids must need something new by now. They must be tired of screaming guitar riffs that say nothing’. So said Cockney Rebel’s Steve Harley in 1973 in one of his many early attacks on post-psychedelic rock and prog excess even if the only guitar riffs I knew in my first year as a teenager were those being bashed out on Sweet singles. Born in New Cross, Harley was not a cockney, but the childhood polio sufferer and one time journo certainly fancied himself as a rebel.

Dismissing any guitar heroics as a hippy anachronism, Harley let a caustic violin and classical keyboards battle for glory while his embrace of literate composition, lush orchestrations and mix of kitsch and the avant-garde ensured that Cockney Rebels debut could never be pigeonholed as mere glam. His arrogance and nascent narcissism may have pissed off the rock kids but desperately seeking something of our own, The Human Menagerie, especially the 10 minute epic ‘Death Trip’, certainly turned our heads. On the cusp of young manhood, he promised a host of Loretta’s, Lorraine’s, Ruthy’s and Ramona’s were awaiting us and he was right!

While we were slavishly penning the Cockney Rebel logo on our arms and being mocked by our schoolmates, the NME’s hippy elite branded them ‘mincing Biba dummies’. That just made us love them all the more although there was nothing mincing about The Psychomodo. After the non-LP hit ‘Judy Teen’, the vaudeville madness of ‘Mr Soft’ provided a second top ten smash but it was the opening punch of ‘Sweet Dreams’ and the title track, ‘Ritz’ and the anti-hippy harangue and self-reverential gloating of ‘Tumbling Down’ that made it so compelling.

Grumbling in the ranks saw the original line-up implode soon after, Harley’s perennial classic ‘Make Me Smile’ denouncing his former co-conspirators financial demands. Ironically, by replacing them with the kind of sessioneer’s he professed to hate, his control freakery gradually began to diminish his muse, right at the moment The Best Years Of Our Lives turned him into a bonafide star beloved by the same kids who’d once ridiculed us so mercilessly.
Of course, in the summer of 1976, the Sex Pistols and punk made Steve Harley instantly redundant. The unsuccessful Timeless Flight had already been and gone by then, his oblique messages and new found romanticism reflecting my just turned 16 year old sense of self-doubt and longing. Eight months later Love’s A Prima Donna completed his journey into sappy sentimentality. Once oozing arty sleaze, absinthe and decadent decay, the next chirruping an old Beatles tune, he had finally defused any last, lingering hangover of his former glory.

The glam seventies may not have been the best years of my life but Steve Harley’s grand, often over reaching, artistic visions made them infinitely more bearable and have gained an unexpected gravitas with age. All that glittered was definitely not gold but in Cockney Rebels case, certainly early on, it absolutely was.