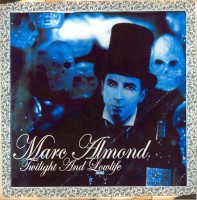 I used to bump into Marc Almond regularly in the early days of The Batcave. A small, intoxicating creature, he fitted that scene like a glove. There was no-one quite like him. Wonderfully uncool with a voice wavering all over the place yet bursting with an all too human passion, he explored the seedier, tackier side of life, living out his fantasies in the clubs and alleyways of old Soho.

I loved all those early, ground breaking records; Torment And Toreros, Vermine In Ermine, Stories Of Johnny and Mother Fist. They were all so magnificently beyond standard 80’s new pop I just couldn’t resist. Gothic, cabaret masterpieces they painted colourfully ribald pictures of a sordid, romanticised Europe with glimpses of the lost, the lonely and the bizarre.

Over the ensuing years Marc Almonds artistic choices may have veered from dazzlingly original concepts to the ridiculously idealistic but the one thing he’s never been is boring. Even in this retro crazed 21st century he’s continued to dodge the call of the lazy 80’s nostalgia circuit, preferring instead to produce unusual and essential work. The end result may be a noble failure on occasion but continues to act as a window on his marginalised and much hidden history. He continues to pursue his own artistic dream and there are precious few who can say that.

3. Tenderness Is A Weakness / Vermine In Ermine LP October 1984