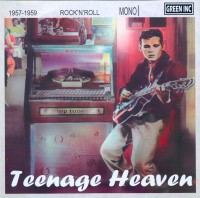 Most of the best rock’n’rollers came out of the South where the living had always been meanest so the rock’n’roll kickback was naturally the most frantic. If Little Richard with his baggy suits, and backcombed hair, embodied the style of rock’n’roll, Chuck Berry embodied the sound. Something of a poet laureate to the rock’n’roll movement, he charted its habits, hobbies, hang ups and triumphs and mourned its limitations. By and large, most white rockers were less impressive than their black counterparts, but there were some notable exceptions like the original tortured rocker Gene Vincent, the hard edged Johnny Burnette and The Rock’n’Roll Trio and the arrogant Jerry Lee Lewis.

Buddy Holly was arguably the most adventurous and barely a rock’n’roller at all. Coming out of Lubbock, Texas with broken teeth, wire glasses, halitosis and every possible kind of country Southerness, he was an obvious no hoper. But, he had a voice and wrote natural hit songs and morphed into Mr All America. His career was perfect in every detail, and just to round it off, he got himself killed in an air crash. He was just twenty.

Where Southern rock’n’roll was all noise, violence, anarchy and a stew of R&B and honky tonk, Northern rock’n’roll was highschool, basically the continuation of white tradition. Highschool was an attitude that said: ’We go to highschool. We dig rock’n’roll. We wear sneakers, short shorts and sweaters. We sometimes neck but we never pet. Our parents can be draggy, but, gee whiz, they were young once and they’re only trying to do their best for us. We dig America and think its really peachy keen’.

Highschool singers were the manufactured, sugar sweet puppets of middle aged businessmen. They transformed rock’n’roll into an exact reflection of what white, middle class, American teenagers really liked and dreamed of, all the danger surgically removed. Probably it was the most pop, pop ever.

At its core was an unlimited assortment of faceless, spotty boys: Tab Hunter, Paul Anka, Danny And The Juniors, Ricky Nelson, Frankie Avalon, even Bobby Darin. They all had neat hair and neat voices. Sometimes they made good records but often they made bad. Generally, highschool was a total dog but it did have a perverse attraction, so bad it’s good and all that. The Everly Brothers were often lumped in with highschool but in rock’n’rolls final years they turned out the most consistently good records of anyone.

Inevitably, highschool signalled the beginning of the end. But there was one absolute rocker still to emerge. Looking like another sub Elvis, Eddie Cochran was a bit quiet, a bit inarticulate, a bit aggressive. His songs were perfect reflections of everything that rock’n’roll ever meant, so right in every detail. It’s not as easy as it sounds, but Eddie Cochran compressed the atmosphere of a whole period into his songs, crystallizing the way the fifties generation worked. And he did it instinctively.

And that’s about where it ends, that was rock’n’roll and those were the great rockers. Sadly, just like Eddie, most of them ended up lost, either dead, drunk or broke, because rock’n’roll was such committed music, with such a specific attitude tied so absolutely to its time that it was impossible for them to move on to anything else. Of course, it wasn’t anything like as complex, or as creative as what came after, but on its own terms, and in its own way, rock’n’roll was quite perfect.