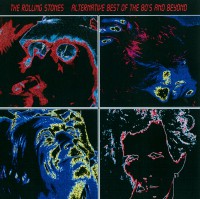 For almost thirty years the Stones have been not so much a band as a brand. Sold out stadium tours followed by souvenir live records keep them in the public eye despite not one solitary song worthy of discussion since 'Undercover Of The Night'. Knowing I’d already hung around longer than I should, even I gave up after that. Of course, it’s a waste of time comparing the 80’s and beyond albums with their decade long sequence of classics. And it’s a waste of time trying to kid ourselves that any of these songs have any relevance in late 20th/ early 21st century music culture because they don’t. Lets be honest, The Stones look set to play out the remainder of their life as solidly and unmomentously as their hero Muddy Waters; never dismissed but taken for granted. For me they will always be something of an intriguing antique curio, one to be checked out but not one to waste too much time on. Whether anyone else can be arsed is another matter although interestingly, Tattoo You is the second best selling Stones album of all time (Some Girls is the best seller fact fans) while Emotional Rescue, Steel Wheels and Voodoo Lounge all appear in the top ten. Clearly there are a lot of people who are still interested.