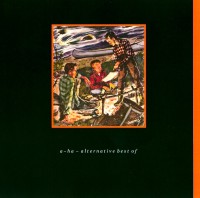 Those of you around for Morten mania over two decades ago may well have a-ha marked down as being the worst type of eighties pop fluff, attractive merely to dripping schoolgirl’s and Secret  Pleasure nerds. And yet, like millions of others you would be wrong because as soon as the toy town tune of ‘Take On Me’ and it’s accompanying vid hit the charts, a-ha immediately transcended such obvious stereotyping and limitations. Infact not since Haircut 100 had such popster’s worn the acceptance of their teen hordes with such endearing confusion.

Armed with nothing more than leather laces round their wrists, heart throb good looks and 'proper' self written pop songs, much like Duran Duran a few years before, it was obvious a-ha had their own thoughts on artistic ambition and seriousness. The difference was that they weren’t just messing around. No Polaroid art pinched from David Sylvian or ridiculous side projects for them. Their first two albums at least were remarkable examples of new pop strategies and schemes and remain genuinely enduring.

OK so it all got a little bit too serious near the end but even Memorial Beach sounds pervasively melancholic and moving, more reminiscent of the Bunnymen than Bros. Infact, there’s hardly a teen group from any era that could have written an album of such emotional scope at the height of their powers, let alone eight years after their faces were first pinned to a bedroom wall. No wonder Chris Martin decided to jump on the bandwagon and proclaim their magnificence. For once he was absolutely spot on.