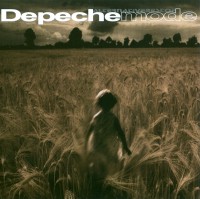 I remember bumping into Depeche Mode in pissy London pubs when they were no more than a support act to other long forgotten futurists and one of a bunch of would be pop terrorists on Stevo’s Some Bizarre compilation. That would have been early 1981. The next time I saw them they were cute little synth poppets, looking like four lost 14 year olds jerking about on Top Of The Pops. Once the most unlikely of popsters, suddenly they were doing it for real.

I hadn’t seen that one coming and I didn’t see the next one either as Vince Clarke abandoned ship taking his rinky dinky toy melodies with him and they metamorphisized into metal bashers with tunes, Martin Gore’s version of pervy Berlin industrialists. For a while it even went a bit weird, standard rock stuff really but a bit heavy for such lovely boys from Basildon. I watched fascinated as Dave Gahan of all people became the star Bono always wanted to be if only he’d been two foot taller and God hadn’t been sitting on his shoulder.

Off the back of that, Depeche Mode became the biggest goddamn stadium trashing, drug guzzling purveyors of air punching misery ever, Gahan’s deadpan, everyman English croon transforming Gore’s themes of depression, decay and dominatrix’s into devilishly catchy and enormously influential nuggets of electro pop rather than the rancid old goth they could so easily have been.

For ordinary Essex boys, Depeche Mode have sure done good successfully juggling their own hang ups and desires with mega stardom. I like to think that they thank their own personal Jesus once in a while, particularly Depeche #3, whose name I can never remember but looks for all the world like a clerk suddenly thrown into an old Prague whorehouse.

7. The Things You Said / Music For The Masses September 1987