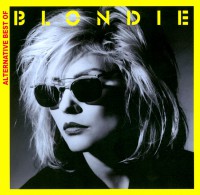 Despite riding in on the back of the whole New York/CGBG’s scene, Blondie went far beyond punk. A generation older, they had gathered enough experience to know that no cool scene could ever match the timelessness of perfect pop and right from the start, Blondie were always more about perfect pop than anything else.

In 1976 Debbie Harry was 31. As a fully grown woman she knew exactly how to blend 60’s girl group boy adoration with erotica to entice boys and girls alike into a world of distant and beautiful lust. Nonetheless, her schizoid take on lost love; one minute gloomy sorrow, the next vicious disdain, made her much more of an icon for girls, even with her platinum blonde bunny girl sexuality. To them she was a woman power Goddess while the shallow boys just wanted to fuck her, conveniently ignoring the fact that she was just about old enough to be their mother.

There’s no doubt that Debbie Harry was Blondie’s greatest attraction but because they operated in an inherently sexist world, she is also the reason why they are now dismissed as an insignificant pop novelty. From the moment they disbanded first time round they were consigned to the over flowing bargain bin of pop history, and they’ve remained there ever since.

Sure the hits are played occasionally on old timer’s radio, repackaged and even remodelled on numerous cash in compilations but the really good stuff; obscure album tracks like ‘Fan Mail’, ‘Pretty Baby’ and ‘Shayla’ remain unknown and unheard. And they just happen to be the most perfect pop songs of them all.