prologue > mini playlists > What A Nice Way To Turn Seventeen 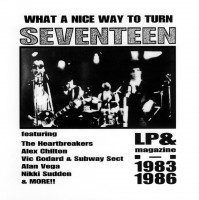 I read a lot of fanzines in the aftermath of punk despite most regurgitating the same old theories and the same old groups. In the mad rush of the early 80’s, with something new and thrilling emerging almost every day, I forgot all about fanzines except for two. Lindsay Hutton’s Next Big Thing and Chris Coleman’s What A Nice Way To Turn Seventeen were beacons of brilliance in an oh so predictable literary landscape. They both ploughed their own furrow regardless of any trend or fashion and stayed true to their own cause. And they were all the more readable for that. With my inborn tendency to flip about all over the place they persuaded me to stay a while longer in their very particular world of maverick rock’n’rollers.

What A Nice Way To Turn Seventeen only lasted for three years, six issues, one EP and two compilation LP’s. Its brilliant writing persuaded me to remember then reconsider my love for The Stones, Bolan and Johnny Thunders and introduced me to the lesser known delights of Nikki Sudden, Dave Kusworth and that whole Leamington Spa/Coventry scene. In its selective way it helped me tune back into the indefatigable spirit of rock’n’roll; the swagger, the glamour, the pure beauty of it. What A Nice Way To Turn Seventeen was everything a fanzine could ever hope to be and a whole heap more. Hopefully these 10 songs evoke the spirit that poured from its every page.

Chris Coleman and Nikki Sudden loved Johnny Thunders so much they did a special one off issue dedicated to him. The best thing I can say about that is it completely changed my view of him as a no good junkie loser. No question, ‘Born To Lose’ is the greatest Heartbreakers  tune by a mile.

Alex Chilton was another What A Nice Way To Turn Seventeen favourite, one of those semi mythical cult figures who has always been adored despite his solo stuff being something of a disaster, ‘Bankok’ was one of the few records that lived up to the legend.

Another outsider buried deep within the myth of punk, Vic Godard never seemed to get the breaks he deserved. The slightly jazzy ‘Stop That Girl’ is his own favourite from a small yet perfect catalogue.

When Suicide faded away Alan Vega disappeared off my radar until Chris Coleman investigated his solo records. ‘Jukebox Baby’ was a number one hit in that alternative universe we all wished we lived in.

An original part of the Flying Nun/Dunedin New Zealand thing Sneaky Feelings were fairly obscure even at the time. Their part in whatever got things moving in the Southern hemisphere has been passed over somewhat as time’s gone by but to my mind they are easily as great as their more illustrious label mates The Chills.

Chris Coleman put me onto these enigmatic Coventry lads and ‘Belladonna’ became a real favourite of mine.

Dave Kusworth’s first appearance here it’s hard to believe that with craft and skill like this The Rag Dolls weren’t huge. Incredibly ‘Sparrows’ only found its way onto vinyl via What A Nice Way To Turn Seventeen‘s first four track companion EP with issue 2.

Nikki Sudden and Dave Kusworth’s regular rock’n’roll sideline were as good if not better than their solo stuff. Robespierre’s Velvet Basement is my favourite Jacobites record, ‘Pearls’ my favourite song. I still play it regularly to this day.

Of course I knew a bit about The Replacements but reading more in What A Nice Way To Turn Seventeen made me listen all over again and discover what I’d been missing.

When Nikki Sudden died in 2006 he left behind a massive catalogue of records. One thing’s for sure, he had always believed in rock’n’roll. It oozed out of him in the way he looked, his love of music and the songs he wrote and because of that I always thought of him as the very essence of What A Nice Way To Turn Seventeen.