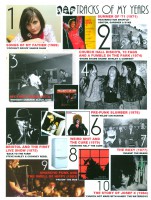 My old man loved Sandie Shaw or Gravel Beach as he used to call her every time she appeared on some BBC end of the pier, light entertainment show. Young Sandie/Gravel even had her own show for a while. I could have used ‘Puppet On A String’ here but she was a lot better than that so here’s a Lovin’ Spoonful tune from one of her better albums I found in my Dad’s record rack.

I made my first couple of life changing discoveries in the summer of 1971. The first was the shocking realisation that girls were sugar and spice and all things nice, The second was the power of pop and rock’n’roll glamour. While my first ‘proper’ LP was over a year away, the first record I bought with my own money was a cheapo Music For Pleasure Hot Hits LP from the local newsagent. With twelve dodgy oompah loompah approximations of recent chart hits, it was my first shaky step on the never ending path to musical nirvana.

There were a bunch of nerdy fourth formers in my school who just happened to be the best musicians. Geeky outsiders, they were never a part of any ‘in’ crowd so when they asked me to drum in their band I faced something of a dilemma. Discarding my ridiculous, self-imposed notion of cool wasn’t a problem, nor was the small matter of never having drummed in my life. But their excretable taste was. So I set to work by renaming them Midnight Creeper and drafting in my Rod Stewart lookalike mate on vocals before weaning them off their rotten Beatles set list and turning them onto the Stones, Bowie, Roxy and Lou Reed.

At such a youthful age it was a brilliant grounding in what it took to be in a group. We played a few shows and wrote a few songs although we no real belief they were any good. The fact that the best school bands (T.N.T. ruled the roost at my school) were no more than human jukeboxes, their sole purpose to sound as close to the original records as possible goes some way to explaining the lack of musical ambition in the mid-seventies. We never did play that Elton John song either. It was just a good band name. At least it was in 1973!

TEN FAGS, CHURCH HALL DISCOS AND A FUMBLE IN THE PARK (1974)

When you first hit your teens, the kids you knock about with, the places you go and the things you do are easily defined. My mates and I would be out all day and half the night yet we’d never roam more than a couple of miles from our estate. We were stuck with hanging around the shops smoking our ten Park Drive from the machine outside the newsagent, and the Saturday night church hall disco where ‘Shame Shame Shame’ was guaranteed to get the girls dancing. And if we were really lucky, there was the ultimate thrill; a kiss and a grope in the park with the Debbie, Jane, Tina or Jackie we’d been eying up since junior school.

I was captivated by Cockney Rebel from the moment I heard the lush orchestration of ‘Sebastian’. Oozing arty sleaze and decadent decay, Steve Harley’s embrace of literate composition, kitsch and the avant-garde turned our teenage heads. On the cusp of young manhood, he promised a host of Loretta’s, Lorraine’s, Ruthy’s and Ramona’s were awaiting us and he was right! We showed our devotion by penning their logo on our arms and ignoring the abuse of schoolmates openly mocking us for liking such a ‘mincing dummy’. Yet there was nothing mincing about the vaudeville madness of The Psychomodo or The Best Years Of Our Lives when ‘Make Me Smile’ turned Steve Harley into a bonafide star beloved by those same kids who’d ridiculed us so mercilessly.

Living in a place like Reading there was no chance of seeing anyone live, let alone Cockney Rebel. Apart from the festival no-one came to Reading, and at 14 years old travelling to London seemed like one adventure too far, not that my parents would have allowed it or provided the necessary cash. So neither I nor my equally infatuated best friend could quite believe it when his sister got us tickets to see Steve Harley & Cockney Rebel at Bristol Colston Hall, the bonus being that we were to stay at her place in Clifton for the weekend. It was such a momentous coming of age, such an incredible experience before, during and after that the date of 23rd March 1975 remains etched on my memory.

1976 was an extraordinary year split asunder by the Sex Pistols. They changed everything but the first six months wasn’t such a great time to be in your mid-teens, my smalltown, small minded world as grey and bleak as ever. When it all got a bit much I’d retreat into my bedroom to play Ian Hunter’s new record and vow to ‘be somebody someday’ like the scorned teenager in ‘Irene Wilde’. 36 years old and a generation older, he was one of the few cool things we had, which tells you everything you need to know about life as a pre-punk suburban boy. Of course, a month later life would be very, very different indeed and Ian Hunter would be history.

In 1977 I spent far too many nights in the shit pit that was The Roxy in Covent Garden. During that long, hot summer, just as punk began its descent into farce, The Bears played bottom of the bill a couple of times. It was obvious they wanted to be Wire and equally obvious that my own group The Kaotix wanted to be The Bears! The brilliant ‘Insane’ took a full nine months to finally give them the two minutes 45 seconds of fame they deserved. To this day its fuzzy undertow reminds me of all those other similarly short lived, no hope punk outfits.

When 1979 came around I was a jabbering, burnt out wreck living in a damp, basement bedsit with a girl I didn’t much like, fucked on too many cheap drugs, not enough cheap food and a mind conjuring up nightmare after terrifying nightmare. Stuck in a paranoid, schizoid state, as the real world sped by like a surreal, speeded up Charlie Chaplin flick I came to a grinding halt, retreating into my own world to find solace in the handful of records I’d managed to keep hold of, Robert Smith’s Three Imaginary Boys keeping me company through many a long, lonely night.

I guess I’ve always been looking for a way out of the rat race. In the early eighties, following my mushroom motivated brush with hippy, the puritanical Crass ethic read like another viable alternative until I discovered that in practice it was more or less the same; laudable, worthy but impractical and full of shit unless you happened to have use of a farm cottage in Epping Forest. The Mob operated inside yet existed outside the joyless Crass manifesto, even if the dog on a string, anarcho punk lemmings didn’t know it. They made one brilliant single and an even better LP which informed me in no uncertain terms that no matter where you go or what you do, no-one can ever opt out completely because the world will always to be there to sneak up and bite you on the arse.

Josef X was one of the original Reading punks who found each other in the summer of ’76. Almost exactly the same age we shared many a misadventure, but I knew little about him until he happened to mention that he played a bit of guitar and joined me initially in The Kaotix and then in the cacophonous, intentionally offensive Jesus Fucks. In fact, I soon discovered that Josef could play any instrument he cared to. He didn’t need the rest of us self-taught amateurs so it was no surprise when he moved to Notting Hill where he got to know Mike Scott and Nikki Sudden and formed The Chain Gang. In the early eighties they began forging a minor reputation of their own before mysteriously disappearing off the radar.

It was only when Josef moved back to Reading that I realised his occasional heroin use had got the better of him and he was no longer able to bend his art around his addiction. Prone to shoplifting and pawning his instruments and gear, I saw him for the last time after an extended stay in hospital. He had jumped off a road bridge and was fortunate to have survived. Clean for the first time in years he was as bright and breezy as I’d seen him since the early days, spending most of our time together raving about The Waterboys and A Pagan Place. I went out and bought it the next day purely on his say so. Sadly just a month later, having given his life over to heroin once more, he OD’d and died an ignominious death in a public toilet down the Oxford Road. ‘Church Not Made With Hands’ will always remind me of him.