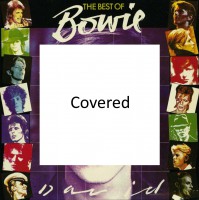 I wasn’t around for Bowie’s golden years. How could I be when I was still in the process of being born as ‘Modern Love’ entered the UK charts in September 1983? And there’s no way that could be considered one of his artistic highpoints. In fact, I was left completely unaware of Bowie’s existence until ten years later when I retrieved a knackered, cassette copy of Aladdin Sane from a dusty old shoebox in our garage. I’d never heard anything remotely like it, its creepy, other worldly mood giving me nightmares for weeks.

That was my first Bowie experience, the second came when I bought Heathen; not exactly the greatest place to start your Bowie collection. Yet while it’s impossible for me to fully comprehend the impact of those original seventies classics, I’ve learnt enough about him in the intervening years to know who and what he was.

I know about his LA cocaine period, when his diet of red peppers, milk and the white powder produced Station To Station, arguably the greatest Bowie album of them all. I know that he pushed hard against and often broke through the barriers of race, religion, gender, style and personal expression. I also know that his artistic integrity was constantly evolving; from teenage glam prince to white boy soul; from revolutionary experimentalist to palatable, consumer orientated, new romantic pop. Admittedly, after that he did get a little lost, but then who wouldn’t?

More than anything his death is that of a supremely creative, illuminating and incredible human being who will be missed as much for what he stood for as his uniquely original and entirely personal sonic output. As I wasn’t around to witness most of it first hand, I’ve put together my own tribute of Bowie covers recorded over the past few decades to illustrate his huge influence on successive generations. Even after his death, I doubt that’s going to change anytime soon.

1. Last Shadow Puppets / In The Heat Of The Morning

2. Nirvana / The Man Who Sold The World

Original release The Man Who Sold The World LP April 1971

3 The Flaming Lips / Life On Mars