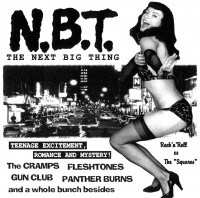 Lindsay Hutton snuck out the first issue of his fanzine the Next Big Thing in the spring of ’77. Featuring The Dictators and Blue Oyster Cult it clearly came from a different planet to the one I inhabited, letting me know about a load of cool pre-punk stuff I knew nothing about. From then on, as each issue ploughed its own path regardless of the fickle tastes and fashions of the day, I was completely and utterly hooked.

Through the early 80’s and the grim aftermath of post punk, the Next Big Thing became a beacon of rock’n’roll individuality, turning me onto records I’d never have heard otherwise. There was nothing, and I mean nothing like it, from the wonderfully trashy black and white design to the enthusiasm literally dripping from the handwritten missives. In fact, with its totally rockin’ aesthetic it was more like a lifestyle choice than a fanzine, and I guess in Lindsay’s case it was.

Now, I don’t think I’m going too overboard by saying that for me the Next Big Thing was never less than inspirational. If it hadn’t been for Lindsay’s infectious devotion and the huge number of contact addresses scattered throughout its pages, I know for sure I would never have kicked off my Raw Cuts LP series of 80’s garage punk or set up Satellite Records.

Sadly, the print version of this wondrous bible came to an end in 1997 with issue #27, a remarkable feat given that like most fanzines it undoubtedly took a whole heap of time and effort for little reward. But incredibly, Lindsay is still going strong with his Next Big Thing blog, older and greyer no doubt, yet still campaigning for the groups and lifestyle he believes in.

The ten groups here were all Next Big Thing favourites but none featured more regularly or more prominently than The Cramps. At the dawn of the 80’s, not only was Lindsay feverishly working on the Next Big Thing, he was also running The Cramps fan club and fanzine Rockin’ Bones, initially with one Stephen Morrissey. So it’s no real surprise their records carry the spirit and magic of the Next Big Thing better than anyone.

I will admit, when I first heard The Fleshtones I was a tad disappointed. Expecting a solid dose of primal rock’n’roll I was slightly taken aback by the new waviness of their early records. And yet, while in places ‘Girl From Baltimore’ does come on like an outtake from Hairspray, it’s still got that essential, fabulously trashy Next Big Thing vibe all over it.

I remember the first time I heard Fire Of Love and ‘Ghost On The Highway’. A fuckin’ great howl of demented gothic punk blues, I swear I thought I’d heard the sound of my future. So it's a cryin’ shame that instead of finding a wider audience, Jeffrey Lee Pierce found the bottle and the needle. These days, if he’s remembered at all, he’s always portrayed as a Johnny Thunder’s type beautiful loser who failed to fulfill his potential yet followed his destiny to it’s inescapable conclusion of an early death.

For folks who loved their rock'n'roll simple and unspoilt, Tav Falco and his ever changing Panther Burns were the ultimate. Scuzzier and rougher than The Cramps, on Behind The Magnolia Curtain he was deep within his wreckabilly phase, successfully mixing the timeless dust of his Memphis heritage with his avant-garde sensibility to construct his own unique road to rack’n’ruin.

Despite being only ten or eleven at the time, from 1966 onwards Unclaimed founder Shelley Ganz refused to live in the real world. Wholly fixated on the garage punk lifestyle, he moved into his hermetically sealed 60’s cave and has rarely come out since. Buying the Primordial Ooze Flavoured EP, I was intrigued not only by its impeccable authenticity but also by the vinyl itself which was an indestructible quarter inch thick. When times were tight I seriously wondered if I could melt it down to press up 500 copies of our latest single.

There was a helluva lot of gruesome, minimalist punk blues coming out of Australia in the early 80’s but none quite so brilliant as The Scientists. I absolutely adored this record, so different was it to the uptight post punk and shiny new pop of the day. And it was all the better for having to put in a bit of effort to get it, mail order the only option because it certainly never graced the racks of Our Price or Boots.

Looking back, it’s easy to see why 1984 was such a dog. The last vestiges of post punk had all but gone, cock waving metal was on the up, and in the mainstream….well the less said about that the better. One tiny chink of light in the darkness was the garage punk ideal the Next Big Thing had been championing from the off. ‘Bad News Travels Fast’ was The Fuzztones, and arguably the new movements, seismic opening salvo which has had a humungous impact over the past thirty years. Even today their influence can still be heard in everyone from The Hives to The Horrors.

Sweden didn’t register as an obvious bastion of teen rock’n’roll until The Nomads came along. Almost single-handedly they sparked the whole Swedish Beat thing, ‘Where The Wolf Bane Blooms’ making us all sit up and take notice whilst simultaneously smashing open the doors for a shit load more sick fanatics like The Creeps and Crimson Shadows to come in from the cold.

I always found it bizarre that while the Swedes were completely transfixed by Nuggets era garage punk, in Australia The Stooges and early 70’s held sway. The Lime Spiders were one of the few exceptions to be influenced by both, ‘Slave Girl’ an absolute masterpiece of primitive perfection.

Let’s end with something a little different because I wouldn’t want anyone to think that the Next Big Thing was stuck in some kinda 60’s timewarp. Then as now, Lindsay would write about anything that took his fancy, from Angel Corpus Christi to Cyndi Lauper to Clarence Clemons and all points in-between and beyond. Tex & The Horseheads were one of the wilder exponents of cow punk, that much maligned genre that may have been borne out of sheer desperation but ultimately led to alternative country and all we now know as Americana. As always the Next Big Thing was declaring its virtues years before most folks could even shout ‘Yee Haw!’