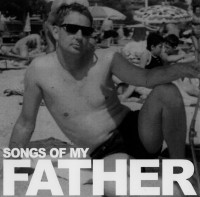 He may have once resembled a 60’s era formula one driver posing on a Monaco beach but my old man was never cool, not in any way, shape or form. He just wasn’t made that way so such a thing wouldn’t even have crossed his mind. A first generation Southerner from a long line of tub thumping Sheffield Socialists who spent their entire lives toiling for other people’s benefit, more than anything he was an all-round good bloke who never appeared to be bothered by anything.

If that makes him sound a little boring, he’d have been the first to admit he probably was. The only thing that got him really excited was hi-fi systems and music in every format imaginable; 78 rpm shellacs, eight track cartridges, metal cassettes, compact discs; it made no difference because he loved them all. It’s a shame he died at the dawn of the digital age because he would have loved that too.

I guess he inherited that obsession from his father who in his quest for work and a better life upped sticks to find his own patch of paradise in sleepy, 1920’s Berkshire. I can still picture old Pop’s garden shed, filled to bursting with the carcasses and rusty guts of ancient turntables, speakers and amps. Having your own hi-fi system was never a problem in our house because he was only too happy to knock one up from his huge stock of vintage parts. While the end result looked like a Heath Robinson drawing come to life, the sound was always incredible.

My Dad never built his own hi-fi. He preferred to buy new but he still refused to ditch any of them. Clearing out the loft in the old family home a decade after his death, I came across his last great stash of wood effect and smoked Perspex players beneath a pile of yellowing Hi-Fi Monthly’s. And yet, despite his obsession, he never considered the equipment to be more important than the music.

Hidden within the sanctity of his record racks was a wide variety of LP’s from Dylan to Debussy and all points in between. Admittedly, in his later years there was a scary amount of easy listening but he also adored girl singers like Sandie Shaw and Dusty Springfield. And beyond them were plenty of bizarre, unexpected pleasures like Isaac Hayes Black Moses, Tangerine Dream’s Phaedra, The Sadistic Mika Band, Lonnie Liston Smith and The Floyd’s. With their cutting edge production and sound, they were the proverbial wet dream to an audiophile like him.

Of course, growing up I had no idea how my Dad’s music would have such a long lasting, profound effect on me. I know for a fact that if it wasn’t for him there’s no way my life with music and the way it makes my world a better place would have happened. Sure, it may have been my own awareness that ultimately determined my own path but it was his influence and racks of pop, easy listening, folk, country and soul that lit the blue touch paper in the first place. These ten songs are the ones I remember the most and my long overdue tribute to him. Praise be to Bernie wherever he may be!

My old man was far too old to rock’n’roll. When Elvis hit in 1956, he was already 23 years old completing his National Service. Fully indoctrinated into the trad, establishment values of the day, the concept of the teenager was way beyond him. Lonnie Donegan was far less threatening than the new American rock’n’roll hoodlums therefore far more appealing. And my old man sure loved a bit of Lonnie.

‘Besame Mucho’ was typical of the strange little 45’s I used to find in my Dad’s singles rack. Sacked by The Shadows for his numerous bouts of drinking, Jet Harris may have been a good looking, highly skilled bassist but he was also an opinionated, awkward bastard who refused to play the game. In an age when individuality was frowned upon and Hank Marvin’s gimp grin and glasses ruled the roost, he never stood a chance.

Tom Jones nicked ol’ Jerry Lee’s arrangement for ‘Green Green Grass Of Home’ wholesale, transforming it into a huge global smash everyone, including me, assumed was about the green, green grass of Wales. It wasn’t until years later that I realised it was a Nashville country classic about a prisoner on the day of his execution. Needless to say, Jerry Lee’s version had the gravitas and pathos Tom’s schmaltz never could.

My old man used to daydream a lot, often in his legendary horizontal position on the sofa. He always said; ‘never stand when you can sit and never sit when you can lie down’. Wise words indeed, particularly in a 21st century where being busy, busy, busy somehow makes your life worthwhile. It’s just a shame that usually means busy with bullshit.

I was never one of those kids who had a mad fixation on America yet even as a youngster, Bobbie Gentry’s songs detailing the mystery and tragedy of everyday life in the Deep South cast their spell over me. My Dad would listen to ‘I Saw An Angel Die’ completely motionless, barely breathing. I have no idea if it’s a song about God, the love of your life or both but I do know that it’s a long way from the easy listening Bobby Gentry was often accused of.

With a Northern father and Dublin born mother my old man’s roots were in British and Irish folk music stretching back to the turn of the century. Despite his tendency to wander off on some strange musical tangents, he’d always return to it at some point. Most of all he loved The Dubliners. In 1987, when The Pogues made them hipper than they ever should have been, his smug ‘told you so’ expression was a picture.

Apart from a few garishly patterned shirts with big collars, ‘flower power’ passed my Dad by. Slap bang in the middle of his 30’s my mother would have been more worried if it hadn’t. The nearest he got to the Age of Aquarius were the progressive, psychedelic tinges Bert Jansch and John Renbourn added to songs like ‘Sweet Child’ on Pentangles sprawling half live, half studio double album of the same name.

In the early 70’s it wasn’t just the music in my Dads record collection I found so fascinating. The long gone yet beguiling England depicted on Hark! The Village Wait’s inner sleeve gave me just as much pleasure as the songs within. Once described as ‘time traveler’s stalking the deserted streets of a medieval village’, Steeleye Span were a step back from the experimentation of Pentangle and one my old man appreciated a lot more.

I have no idea how this found its way into my Dad’s racks. He was never a blues fan so a random, obscure, strictly for devotees LP by a blues legend was definitely an odd one even for him. Maybe he bought it for the undeniably great version of ‘Summer In The City’, originally by his old favourites The Lovin’ Spoonful. Whatever the reason, I used to play it a lot.

As my own record collection began to increase I became less and less interested in my Dad’s. An insurmountable generation gap had kicked in that would lead me into all kinds of mischief he didn’t approve of. Thankfully, unlike my mother he refused to judge. An island of calm in the tumultuous times that followed, ‘I Feel Like Going Home’ encapsulates my feelings towards him in those teenage years when no matter what I’d been up to he’d greet me with open arms, unconditional love and a bacon sarnie.