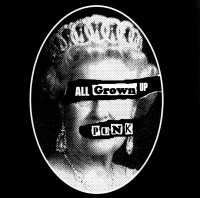 It didn’t come as a complete surprise to find that the middle aged Britpop boys featured on the first All Grown Up are still ringing every last drop of cash from their wet flannel of success. But punk’s original movers and shakers were supposed to be different. Raised in the austere 60’s and early 70’s, they were rarely blinded by naked greed or ambition. In fact, so absolutely tied were they to such a specific attitude and time, it was inconceivable that the likes of Wire or Howard Devoto’s Magazine would still be knocking out the odd album 35 years later.

When I started this archeological dig, apart from Mark Smith’s ever present Fall and Viv Albertine with her recent, brilliant autobiography, I had no idea what any of them had been up to. I guess in these nostalgia fuelled times, where middle aged fools try to recapture the glory of their youth by watching a bunch of even older old farts topping up their bank balance, the fact that punks once inspirational and innovative names are still around doesn’t seem quite so strange. I still find it disconcerting and kind of sad but as I know only too well, high falutin’ punk principles never did put food on the table, clothe the kids or fix the car.

Of course, whether anyone here is anything other than an antique curio is another matter. Punk was always the exclusive province of the young and right now any kid making music on their laptop in any Godforsaken shit hole of the world is more exciting, revolutionary and downright punky than this lot. But the truth is, for a bunch of old lags perilously close to pensionable age, some ain’t half bad; Mick Jones and Tony James absolutely rollicking ‘Why Do Men Fight’, Viv Albertine’s painfully honest ode to love, marriage and disillusionment, Vic Godard’s nod and a wink northern soul and The Fall being The Fall are all highlights.

The rest are pleasant and interesting enough although it is still possible to detect the whiff of ‘going through the motions’. And of course, it’s a waste of time trying to kid ourselves that any of these albums have any relevance in the 21st century because they don’t.