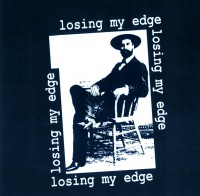 ‘Losing My Edge’ by LCD Soundsystem was my most played and most important song of the noughties. While my inner music snob came out to play again, it also forced me to accept that the kids weren’t just ‘coming up from behind’, they’d gone racing past me years before and I hadn’t even noticed. Quite rightly modern music culture is all about being young and strong rather than old and weak. If like me you’re more concerned with paying the mortgage and how your kids are doing you’re most definitely on the outside looking in.

In the grand scheme of things there really shouldn’t be any place for boring middle aged lags anymore, even though with every band there ever was reforming to rake in a few more quid that logic can seem kind of outdated. I find it weird to think that James Murphy’s ode to the likes of me is itself over a decade old. Of course, its still as relevant as ever with the original kids he was talking about now consigned to history by a new generation just as I was. And so it will most certainly go, on and on and on.

Playing it again recently while compiling yet another playlist of my favourite songs ever, one of the most fascinating things about ‘Losing My Edge’ was always Murphy’s list to end all lists of semi obscure and elitist hipster artists. Out of the fifty five or so he mentioned I knew absolutely nothing about ten of them. At the time I swore I’d investigate further when I could be arsed. It may well have taken me eight years or so but I’ve finally made the effort and I must say I’m glad I did because the majority were well worth it.

Jazz…..Nice! Mention that word and I can’t help thinking of The Fast Show. Mention the word harp and I just think of angels. The two just don’t go together yet Dorothy Ashby was a jazz harpist and supposedly the best there ever was in what must surely have been an extremely small field. Even so, I’m sure neither James Murphy or anyone else for that matter would have heard of her if it wasn’t for tracks like ‘Soul Vibrations’ being plundered by some of the more astute hip hop heads.

David Axelrod was another jazz muso sampled to death by the hip hop nation. A revered, well respected figure he was one of the first to mash jazz, rock and R&B together so was naturally ripe for the picking. DJ Shadow nicked big chunks of Song Of Innocence for his ground breaking Endtroducing album while ‘Holy Thursday’ itself has been resurrected by far too many others to mention.

In December 1981, once influential Krautrocker Manuel Göttsching decided to record an idea he was working on, an hour long piece entitled E2/E4 which somehow went on to become an important building block in the DNA of house, techno and every dance music genre from thereon in. Coming on like the sort of inoffensive background music my old man loved, I’m not knocking old Manny but I really can’t hear it myself. A classic case of the emperor’s new clothes?

I can’t believe I knew nothing about Sun Ra, him being such a legend and all. One explanation is that like Dorothy Ashby and David Axelrod he was a jazz musician and I just can’t get into that stuff no matter how hard I try. You see, a bit like the sixties, jazz is from a different age that has nothing to do with me. ‘Nuclear War’ is alright though, a jazz funky track with a repeating chant of ‘Nuclear War, they're talking about Nuclear War/It's a motherfucker don't you know’. Bizarrely it was originally released on The Pop Groups tiny Y label. No wonder it remained completely obscure.

This is more like I expected given James Murphy’s known influences and it’s easy to see how this one record wonder could be considered a pioneer of Detroit techno despite coming from Cleveland on the other side of Lake Erie. The brainchild of DJ Lynn Tolliver, its dirty electro funk is not unlike Juan Atkins Cybotron. I can’t believe it took me over 20 years to hear for the first time. Ridiculous!

And it’s the same plea of ridiculousness with Niagra although the fact that they only ever sung in French is a fairly decent excuse. Fabulous synth pop carried along by Muriel Laportes sheer force of character I’m glad I finally bothered to seek them out. .

Index proved a bit of a problem to find because over the years there’s been a handful of groups’ using that name. I’m guessing I’ve got the right Index though because as a cross between deep house and soulful American garage it’s exactly the kind of record I suspect James Murphy would have loved being something of a seminal record during the early rave years. Not that I’d have a clue about any of that stuff.

More of a production team and label than a group, the Basic Channel set up was a major player in shaping mid 90’s techno. Based in Berlin their original nine releases could only be identified by the catalogue numbers as their label logo deliberately became more and more unreadable with each release. Glitchy minimal techno, it’s certainly not for everyone but has a definite charm even if it’s not quite as awe inspiring as I thought it might be.

‘Smiling Off’ was released long after ‘Losing My Edge’ was conceived and released but James Murphy was clearly a fan as it came out suitably remixed on his super hip DFA label. That’s just as well because in their original primeval state Black Dice were just an unlistenable, really quite horrible racket.