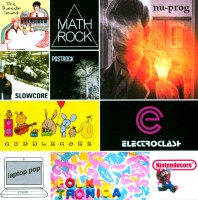 Noted for its angular guitar rhythms, dramatically alternating dynamic shifts and irregular time signatures, the original math rock was the more challenging side of pre-grunge US alternative rock usually produced by Big Black and Nevermind supremo Steve Albini.  Ironically Spiderland had nothing to do with him.

Porcupine Tree / Fadeaway ( Up The Downstair May 1993)

A few years after proggy came early 80’s neo prog with Marillion and all those earnest Genesis copyists. Then came nu prog or post prog led by the brilliant first version of Steven Wilson’s Porcupine Tree.

I don’t remember this at all although I do remember Low. Apparently slowcore was a handful of vaguely connected 90’s groups who had a thing for slow tempo’s and downbeat melodies.

This desperate journo invented moniker covered a multitude of groups using a trad rock line up to experiment and as such was applied to every pre-Britpop UK group who couldn’t be easily pigeonholed. The theory was great but the records generally weren’t.

I‘d never heard of cuddlecore but listening to Cub it sounds like 80’s indie pop. In other words the usual mix of riotous punk and bittersweet harmonies. Pretty good infact.

I’ve always loved Peaches but was slightly surprised when I found out that originally she was a standard bearer for electroclash. The genre name is self explanatory really; wholly electronic beats fusing techno, punk and electro pop without the slightest nod to dance. In effect, an updated version of Alan Vega and Martin Rev’s Suicide.

Ratatat exist pretty much as their own genre and a bit of a stupid one it is too. I expected futurism but couldn’t really feel it and then discovered that the term laptop pop actually relates to the recording process and not the sound. Does one group really constitute a genre? I think not.

Probably the least forgotten of this bunch. While electronica by its very nature has just got to be the antithesis of folk, somehow the likes of Tunng and Four Tet blend the two, mixing standard acoustic bits, sampled or otherwise, with modern beats while remaining undeniably folky. Good stuff.

A variant on chiptune and chipcore, only in America would vintage Nintendo fans get all nostalgic for the 8 bit sound of their wasted youth and then try to recreate it. What the fuck is the point?