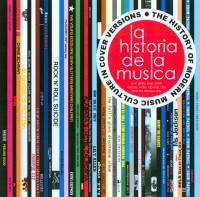 The History Of Modern Music Culture In Cover Versions

In the second decade of the 21st century, the mystifying art of the cover song has been almost completely corrupted by the incessant chirruping of all those desperate TV talent show wannabes and neverwillbes. Popstars, Pop Idol, Fame Academy, X Factor, The Voice, those programmes are everywhere, filling up every last minute of our dull weekends. Versions of old classics or recent best sellers remain their staple diet, watered down, homogenised, bland and very, very beige. But it doesn’t have to be that way.

The first golden rule of doing a cover is if you don’t have any new flavor to add to the original, then don’t bother in the first place. In the hands of adventurous music makers, covers can be a great device for speaking in a more colloquial tongue. It doesn’t matter how deviant or extreme the execution, what matters is how that close encounter with a familiar melody or hook speaks to even the most casual listener.

Some re-contextualise the classic’s, some shine a light on the brilliant writing at the heart of the original, while others elicit a wry smile of recognition with just the right amount of humour and reverence. Despite the familiarity so central to their very core, covers are always at their best when offering an entry point into music that is beyond our normal experience, so providing an easy way in to those new listening experiences we all crave so much.

Listed here, edited down from literally hundreds and thousands, are some of my favourites from the past four decades in a vague attempt to tell the history of modern music culture in cover versions. Some you will know, some you will not, some are radical reconstructions, some just provide a bit of oomph, but all are suitably thrilling remakes, twisting perceptions of their original sound and meaning.

3 The Slits / I Heard It Through The Grapevine

4 Laibach / Sympathy For The Devil

7. Saint Etienne / Only Love Will Break Your Heart

1. Afghan Whigs / Lost In The Supermarket

5. The Futureheads / Hounds Of Love