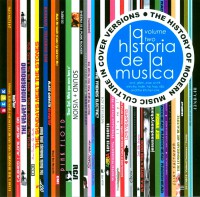 I’ve loved cover versions right from The Clash’s ‘Police And Thieves’ and The Pistols ‘No Fun’. You just can’t beat a good cover. Of course, these days they are so prevalent some ignorant old bastards have begun to proclaim that all the best tunes have already been written even though they don’t much like cover versions themselves. It would appear that they believe an artist is somehow cheating and artistically corrupt by performing any song other than their own. Odd then that the kind of artists these fools truly do love like Elvis P, The Beatles, The Stones, even the crinkly God that is Dylan, built their early careers on a solid foundation of other people’s songs. Naturally they would never dare call them rotten.

As per usual it’s all in the teaching. Once upon a time covers as a concept in their own right weren’t even a consideration. They existed alongside an artist’s regular self penned songs and no-one thought anything of it. It was only at the turn of the new century that covers began to be considered something of a dirty word, no doubt influenced by the hordes of wannabe nobodies warbling all those insipid auto-tuned versions on the ever increasing cycle of TV talent shows.

Let’s face it, crap covers of crap songs are all around these days. And yet, as we all know, they can be so much more than that. Sometimes, they can even be - shock, horror - better than the original. Just because an artist wrote a song back in the day or even the other day doesn’t mean it’s sacrosanct or untouchable. And it doesn’t necessarily mean they wrote or performed it the best way possible either, no questions asked, forever and ever amen. In fact, as far as I’m concerned, any version of a Beatles song is better than the original and the same goes for Oasis and quite possibly Dylan too.

What we have here on Volume Two of The History Of Modern Music Culture In Cover Versions is more of the good stuff. Despite the ridiculous, pretentious title, Volume One immediately became one of our most popular playlists ever and Volume Two is simply more of the same. I don’t think you’ll be hearing any X Factor or Voice wannabe sounding quite like these anytime soon.

2. Echo & The Bunnymen / People Are Strange

13. The Wedding Present / Make Me Smile (Come Up And See Me)

14. Sparklehorse / Wish You Were Here

19. The Dandy Warhols / My Sharona

Original Release The Knack May 1979 Single

5. The Postal Service / Against All Odds