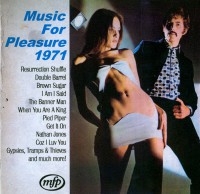 As someone who grew up on Top Of The Pops, I believe in the myths and legends of pop as much as anyone. I love the glitz and the glory, the wetting of knickers and the debauched, deathly lifestyle. Equally I’m in love with the one hit wonder, the penniless slightly crazed forgotten nobodies who end their lives anonymously behind closed curtains in the council flat next door. I love them all but it wasn’t always so.

It’s a fact that anyone who’s ever going to develop a love affair with pop always does so by the age of ten or eleven, twelve at the latest. In 1971 I had just turned eleven so was ripe for the picking! I had never been interested in pop, so preoccupied was I with footie, motorbikes, climbing tall trees and how to get through life in my new grammar school. Of course, when you’re a pre-teeny tween your world and mindset can change a million times a day for no apparent reason. Just a few months later I began to realise that not only were girls sugar and spice and all things nice but that pop could take me anywhere I wanted to go without even leaving my bedroom.

Now history would have us believe that in the long list of pop years, 1971 was one of the worst. I would never agree with that but it was certainly a time of change. Still in denial that the 60’s really were over, the only thing everyone agreed on was that the pop single was a thing of the past. The future would be album sized and in 1971 it most definitely was, chart topping LP’s by The Stones, ELP, The Who, Deep Purple and Led Zep heralding a far heavier, more serious age.

Consequently, pop was quietly forgotten, cast adrift on a desert island largely populated by three minute slices of lightweight fluff. Of course, from time to time there was the odd rock interloper. In fact, it’s bizarre to think that I only heard The Stones for the first time because of ‘Brown Sugar’s high chart position. Even more bizarrely, my first shaky steps on the never ending path to musical nirvana didn’t come from the original singles but from those cheapo Music For Pleasure Hot Hits LP’s with their dodgy oompah loompah approximations of the top twenty.

Optimistic and innocent, gloopy and sentimental, those LP’s were packed with lightweight reggae, easy listening country and manufactured pop from songwriting teams like Roger Cook and Roger Greenaway (‘The Banner Man’, ‘When You Are A King’) and future glam aficionados Nicky Chinn and Mike Chapman (‘Tom Tom Turnaround’, ‘Co Co’). It made no difference to me; they were all equally fantastic. Then came an even more life changing realisation that would have an everlasting impact.

Amongst all the novelty schlock and bubblegum I was happily losing myself in shone a deceptively simple blues. The moment I heard Bolan’s ‘Get It On’, I knew that he was going to be my key to the secret mystery of rock’n’roll glamour and a world beyond pop. Seeing him on Top Of The Pop’s a week later, the glitter sparkling beneath his eyes, was my very own vision of heaven. It certainly had the same effect.

I converted instantly, ensnared in Bolan’s magical web and the glitter of the glam revolution. And when that became a little too one dimensional I moved onto Bowie, his alien artfulness leading me to darker, far more thrilling kicks. The rest as they say is history. But it’s still good to know that none of this would have happened without those Hot Hits LP’s and 1971. My year of Perfect Pop Forever!