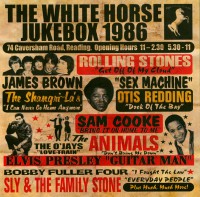 The summer of ’86 was the very best of times. The second phase of Criminal Damage had come together nicely around a handful of London based Reading groups which ironically had created a vibrant local scene for the first time. Our promotional activities had also shifted from the tiny Paradise Club to the 1,000 capacity Majestic ballroom near the Railway Station, Reading’s show starved youth turning out in force every Wednesday night for whichever top notch indie or chart group we could afford, ably supported by one or two of our own. As we gravitated across town our regular drinking hole shifted too.

The White Horse was built onto the side of Caversham Road Railway Bridge, 100 yards from the Majestic and directly opposite The Duke Of Edinburgh, a cavernous, Victorian shithole full of falling down piss heads from the hostel next door. The White Horse was a shithole too, pure spit and sawdust, but its licensing hours were as flexible as its spirit measures and it was so permanently empty we were able to call the back bar our own. Far more importantly; the jukebox was the coolest in town.

My closest confidante, drug buddy and permanent fixture at the bar was Denny Mills of Them Howlin’ Horrors. Much like The Membranes John Robb, Denny’s enthusiasm for life and all things rockin’ was infectious and I loved him for it. Another regular was Chris Maund of MB Hi Power who often came down to visit his Mum. He was no less intense than Denny but the complete opposite. A tee total, anti drugs puritan, he may well have been a right on fist punching radical but his knowledge of country, bluebeat and obscure rockabilly was encyclopedic.

Compared to Denny and Chris I was shocked at how little I really knew of music culture before the tail end of the 60’s. Beyond teenage favourites The Velvets, The Doors, The Stones and Motown’s smash hits, I literally knew nothing. Meeting them gave me a remarkable education in everything from honky tonk to rhythm and blues, from gospel to rock steady. And when such righteous dudes as T. Tex Edwards, Tav Falco, Hidden Charm’s Per Hagred or Greasy Pop’s Doug Thomas came over, my head almost blew off with the sheer volume of new info I was trying to cram in.

Not only did they talk of genres and artists from across the ages; the who’s and the what’s, the why’s and the wherefores, the meaning and the myths, the back bar jukebox provided a non-stop soundtrack for their impromptu history lessons, its 100 singles feeling more like time capsules buried in time and dust for explorers like me to discover.  Worn and scratched, in my mind their brilliance was magnified because I was hearing many of them for the first time. All true meaning was in that shabby, stinky little back bar. It was there that my enduring love for Otis Redding, The Shangri-La’s, Eddie Cochran and George Jones took hold and it was there that I built the foundations for pretty much everything I know now. All that I’ve learnt since has just added to that core.

We believed those nights would go on forever but the inevitable, final collapse of Criminal Damage proved to be the end. The label had been the glue that held us all together and that bond had been broken. Without it we all went our own very separate ways. I never went in The White Horse again. A decade later it was demolished to make way for yet another anodyne office block. The Majestic and Duke Of Edinburgh soon followed. But I will never forget that one brilliant summer; Denny and Chris, The White Horse, the back bar, the jukebox and the knowledge they gave me. How could I? I still use it every single day!

Don’t Let Me Be Misunderstood / A Monster (Philips January 1965)

She Thinks I Still Care / Geronimo (His Masters Voice May 1961)