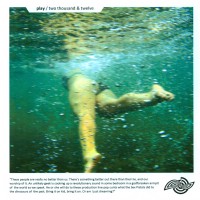 “These people are really no better than us. There’s something better out there than their lie, and our worship of it. An unlikely geek is cooking up a revolutionary sound in some bedroom in a godforsaken armpit of the world as we speak. He or she will do to these production line pop cunts what the Sex Pistols did to the dinosaurs of the past. Bring it on kid, bring it on. Or am I just dreaming?”

02 THE MACCABEES “Pelican” From Given To The Wild January 2012

04 SCUBA “The Hope” From Personality February 2012

10 MAGNETIC NORTH “Bay Of Skaill” From Orkney Symphony May 2012

16 WILD NOTHING “Nocturne” From Nocturne August 2012

20 EVERYTHING EVERYTHING “Cough Cough” From Single A Side October 2012