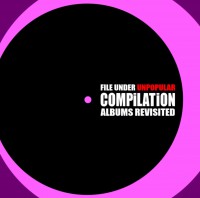 I’ve bought or permanently borrowed dozens of compilation albums over the years. From my first tentative steps into the wonderful world of pop to my early exploration of industrial, hip hop, acid house, techno and beyond, they were the essential gateway drug; the most efficient, cost effective way to check out new genres, artists and curio’s. An ephemeral album discarded as soon as the initial buzz of discovery faded, compilations rapidly slid to the bottom of the pile where they would languish in obscurity before being shifted into the garage or sold to the local secondhand shop, the worst possible fate for any record.

Of course, in a 21st century world of iTunes, Spotify and YouTube, where all music is instantly accessible and we are all our own tastemakers, most label or genre samplers are irrelevant. These days only esteemed, well curated series like Late Night Tales or DJ Kicks retain any value. However, if it’s vintage musical variety, irreverence and genre defying leaps of imagination you’re after, check out these various artists albums from my distant past, lovingly compiled as always.

Motown Chartbusters Volume Six should remind me of the brilliance of Smokey Robinson, Levi Stubbs, The Temptations or The Elgins and it does. But, it also reminds me of four lads in a tiny, red, Honda Civic circa 1975 driven by a long lost, slightly older mate called Neil, speeding through the narrow, country lanes of olde worlde Berkshire, desperately seeking an out of the way alehouse to relieve the boredom of our dull, grey lives. I have fond memories of that car, working our way through Neil’s cassette collection of Motown Chartbusters, putting the world to rights and dreaming of what the fuck we were going to do with our lives. It was in that car that I finally summoned up the courage to leave school, but perhaps more importantly, it was in that car that I learned to love Motown.

The whole point of any cheap, label sampler was to introduce you to music you wouldn’t normally listen to. In that respect Warner Bros Music Show certainly did its job. At 59p it was well worth a punt, introducing me to Little Feat, Graham Central Station, The Doobie Brothers, Montrose and Tower Of Power who I’d never have heard otherwise. Not that I went on to become a fan or anything. Even now, all I really know of them are the tracks on this album. And I still can’t listen to them without the cover image of Bugs Buggy in pink shades with a guitar case under his arm popping into my head.

In the past I’ve written about The Front Line – a cheap, 69p sampler of Virgin’s new label – and how it was my introduction to reggae proper. But it wasn’t, not really. After all, I’d been listening to Bob Marley since Catch A Fire and already owned the odd roots single. I guess the one thing it did do was educate me that little bit more. While some of the tracks are more lightweight than I remember them, there’s no denying the blood and fire in U Roy’s remarkable ‘Natty Rebel’ (using The Gladiators uncompromising version of Marley’s ‘Soul Rebel’ as its source), Mighty Diamonds ‘Right Time’, I Roy’s ‘Don’t Touch I Man Locks’ and The Gladiators ‘Know Yourself Mankind’.

FAVOURITE TRACK ‘Where Were You?’ The Mekons

Edinburgh’s Fast Product released a mere eight singles in its short lifetime yet still managed to introduce the world to such post punk luminaries as the Gang Of Four, The Human League, The Scars and The Mekons. What I liked about the label was its artful defiance. As an independent label owner myself in the early eighties, the Fast blueprint was certainly one to aspire to. The First Year Plan collects together the labels first six singles (2.3 are the obligatory unknowns), and is a timely reminder of all that was good about the early, post punk, independent scene before it became a meaningless wasteland of indie charts, Peel sessions and brown nosing the weekly music press.

FAVOURITE TRACK ‘Que Pasa / Me No Pop I’ Coati Mundi

Riding a creative (if not commercial) tidal wave for all it was worth, New York’s subversive art pop label Ze chose to release a showcase that pulled in everything extraordinary about arty punk disco, and gave it a name. Mutant Disco was an intellectual, exotic thing that encapsulated the weird world of Ze, where the artists tried to have their cake and eat it by making ironic disco pop that laughed at disco pop. They didn’t succeed but the idea that the essentially transitory nature of dance and pop could be politicised so that it actually meant something was a whole new way of thinking that persists today, albeit you have to dig deep to find it.

Whether or not they took their lead from Mutant Disco is debatable, but nonetheless, my old mates Illuminated Records attempted to create a similar dynamic in the UK with a bunch of post punk experimentalists pushing a dysfunctional kind of industrial dance music of their own. 23 Skidoo, with the 12 inch version of their epic ‘Coup’, Portion Control, 400 Blows and Dormannu featured on a couple of C30 cassettes, of which Discordia Dancefloor was both the first and best. Designed primarily for promotional purposes, more by luck than judgement, it captured the formative stage of an independent, dancefloor, underground that would culminate in M/A/R/R/S mega smash ‘Pump Up The Volume’.

In a time when the youth of the day made it clear which tribe and music they were into by the way they dressed, no matter how much I liked the music, being a psychobilly was never an option. I was never a goth either but I much preferred the dubious pleasures of The Batcave to the violent wrecking ball of psychobilly central at the Klub Foot, Hammersmith. In fact, the only time I got within spitting distance of the live psychobilly experience was promoting a packed Meteors / Guana Batz show in my hometown. So I guess my liking for the genre came from my love of The Cramps. Naturally, Alien Sex Fiend, Bone Orchard, The Stingrays, Panther Burns, Shockabilly, The Meteors and the other bequiffed lads and lasses on Blood On The Cats didn’t match the brilliance of Lux’n’Ivy, but now, like a recently recovered time capsule, in their own furiously rockin’ way they do serve as a brilliant reminder of those troubled, tribal times.

Morgan Khan’s Street Sounds Electro Series took eight or so American dance imports, turned them into one continuous mix and presented upwards of 25 quid’s worth of 12 inch singles on an album for under a fiver. As a business plan it was inspired, particularly as all 10 of the original volumes released between 1983 and 1985 (before a name change to Hip Hop Electro) charted nationally, but as a scene creator it completely changed the sound of UK dance music. For a large proportion of British youth, it was the first time they’d heard anything as strange and so obviously ground breaking as Knights Of The Turntables ‘Techno Scratch’, Egyptian Lover’s ‘Egypt, Egypt’ or Arthur Baker’s ‘Breaker’s Revenge’.

Paul Morley’s smug intelligence, concepts and japes with ZTT wound up a lot of folk, not least because of Frankie’s seismic chart success. Ultimately, the labels golden age would be brief, yet in terms of innovative marketing, sonic invention and commercial achievement, by 1985 they had done enough to make a significant mark. Having run an indie label for years, I bought IQ6 to pick up a few tips from the professionals and was duly impressed. Not that everything on it matched Morley’s subversive, aural vision. Of the unknowns, only French chanteuse Anne Pigalle was worthy of further attention. But as a pop moment in time it was fascinating, ‘A pop world within a world’ as Morley liked to say.

1988 was the Second Summer Of Love, when acid house, one of the weirdest and most influential trends to zap mainstream pop, hit like a sledgehammer and a bevy of cash in compilations filled the UK record racks. Acid House is the album I remember the most, the one that hasn’t dated significantly and a fitting testament to the disco apocalypse that was acid. Deliciously nuts, it was music that may have been minimalistic and repetitive but it certainly wasn’t dumb, being something that briefly managed to unite black and white, gay and straight, male and female on the dancefloor by neatly mixing the pulse of electro disco with the aggression and tastelessness of punk. It still sounds like no other music on earth.